Location, Structure, and Functions of the Unipolar Neuron

Neurons refer to nerve cells that perform the vital function of conducting nerve impulses. This Bodytomy post provides information on unipolar neurons, which are neurons that have just one extension from the cell body.

Home / Uncategorized / Location, Structure, and Functions of the Unipolar Neuron 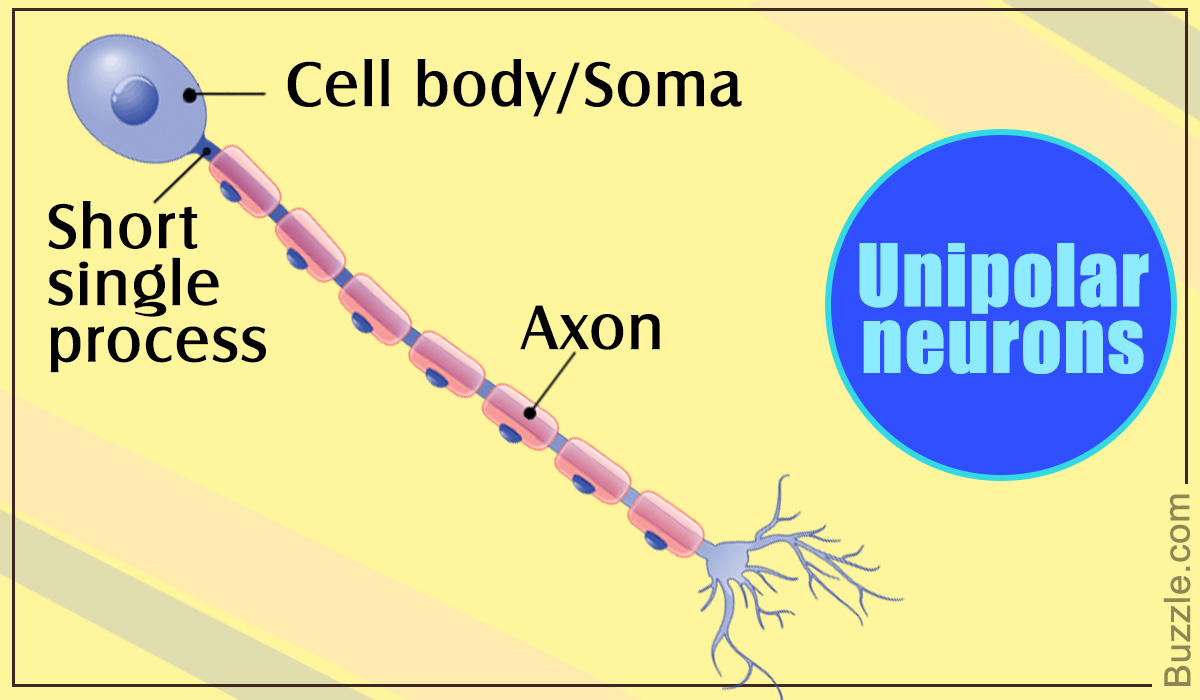 Neurons refer to nerve cells that perform the vital function of conducting nerve impulses. This Bodytomy post provides information on unipolar neurons, which are neurons that have just one extension from the cell body.

The structural and functional unit of the human nervous system, neurons are nerve cells that transmit nerve impulses. The human nervous system is composed of more than 10 billion neurons. On the basis of their function, neurons are classified into sensory, motor, and associated neurons. Sensory neurons conduct information in the form of nerve impulse from the receptor cell or organs (eyes, ears, nose, tongue, skin) to the nerve centers in the brain or the spinal cord. On the other hand, motor neurons convey impulses from the central nervous system to an effector such as a muscle, thereby facilitating muscle movements. The associated neurons, which are also called interneurons, relay signals between the motor and sensory neurons. When the classification is made on the basis of the structure or the shape of the neurons, neurons are divided into unipolar, pseudounipolar, bipolar, and multipolar neurons. Most neurons are multipolar in nature. Unipolar neurons that begin as bipolar neurons are referred to as pseudounipolar neurons.

Anatomy of the Neurons

The components of a neuron include:
✦ Cell body (Soma)
✦ Dendrites
✦ Axon
✦ Telodendria
✦ Ganglia

While the cell body contains the nucleus and other organelles, dendrites are shorter processes extending from the cell body. Dendrites are shorter and have many branches. They act as receptors, receiving impulses from the nearby neurons at the synapses, and transmitting them to the cell body. An axon refers to a long, slender cytoplasmic process that conducts nerve impulses away from the cell body. The axons that are coated with myelin sheath can transmit impulses at a very high speed. Some of the axons are very long, and these could transmit impulses at a high speed of up to 300 feet in a mere second. The terminal branches of an axon are called telodendria. These come in contact with other neurons at synapses, which are small gaps at the end of the neuron that facilitate the passage of information from one neuron to the next one. Ganglia refers to the groups of neuron cell bodies that lie peripheral to the central nervous system in vertebrates.

In case of pseudounipolar neurons, the axon and the dendrite are fused, which give the appearance of a single process. Basically, these neurons begin as bipolar neurons during development. While these neurons don’t have true dendrites, a single axon emerging from the cell body moves in two opposite directions. While one end heads for the skin, joints, and muscles, the other end moves to the spinal cord. The pseudounipolar neurons are the most common type of sensory neurons in the human nervous system. These can sense pressure, touch, and pain. These can be found in the dorsal root ganglia of the spinal nerves, as well as the sensory ganglia of the cranial nerves (with the exception of the vestibular/auditory nerve). The baroreceptor-sensitive cells in the nodose ganglion are examples of this type. These cells sense changes in the systemic blood pressure, after which they transmit this information to the neurons in the dorsal medulla. These neurons are found in the ganglia (specialized masses of nerve tissue) that lie outside the brain, as well as the spinal cord.

On the other hand, bipolar neurons have one axon and one dendrite. In the human nervous system, bipolar neurons can be found in the sensory organs like the eye and nose. These can be found in the retina and the olfactory mucous membrane. Their dendrites send signals from those organs to the soma or the cell body, whereas their axons perform the function of sending signals from the cell body to the central nervous system (brain and spinal cord). Multipolar neurons have one axon and several dendrites. Most neurons whose soma or the cell bodies lies within the central nervous system belong to this category.

The axons and dendrites are bundled together into nerves, which in turn perform the function of sending signals between the central nervous system and other body organs through nerve impulses. These impulses are received at the dendrites. From the dendrites, impulses move along the axon to the terminal branches that end at a synapse. A synapse refers to a junction between two neurons. At this junction, the signal is carried across to the dendrites of the nearby neurons. The communication between neurons involves electrical signals, as well as chemical messages. The transmission of the nerve impulses from and to the central nervous system depends on the electrical charges on either side of the cell membranes of the neuron. The human body consists of different charged particles or ions that are dissolved in the body fluids. Sodium ions, potassium ions, and chloride ions are involved with the nervous system. At electrical synapses, ions and other molecules pass through the synapse, thereby facilitating the passive transmission of electrical signals from one cell to the other.

On a concluding note, true unipolar neurons are found in invertebrates, with their motor neurons being unipolar rather than multipolar. Pseudounipolar neurons, which are found in the human nervous system, are classified as sensory neurons. A sensory dendrite on the distal end of the axon detects changes inside or outside the body, then an electrical signal is carried down the axon into the central nervous system. These neurons are responsible for the vital function of conveying sensory information to the brain or spinal cord.