Structure and Function of the Haversian System Explained With Diagrams

The term 'Haversian system' refers to the arrangement of cylindrical-shaped structural units called osteons in compact bones. Bodytomy provides a labeled diagram of the Haversian system to help you understand its structure and function. 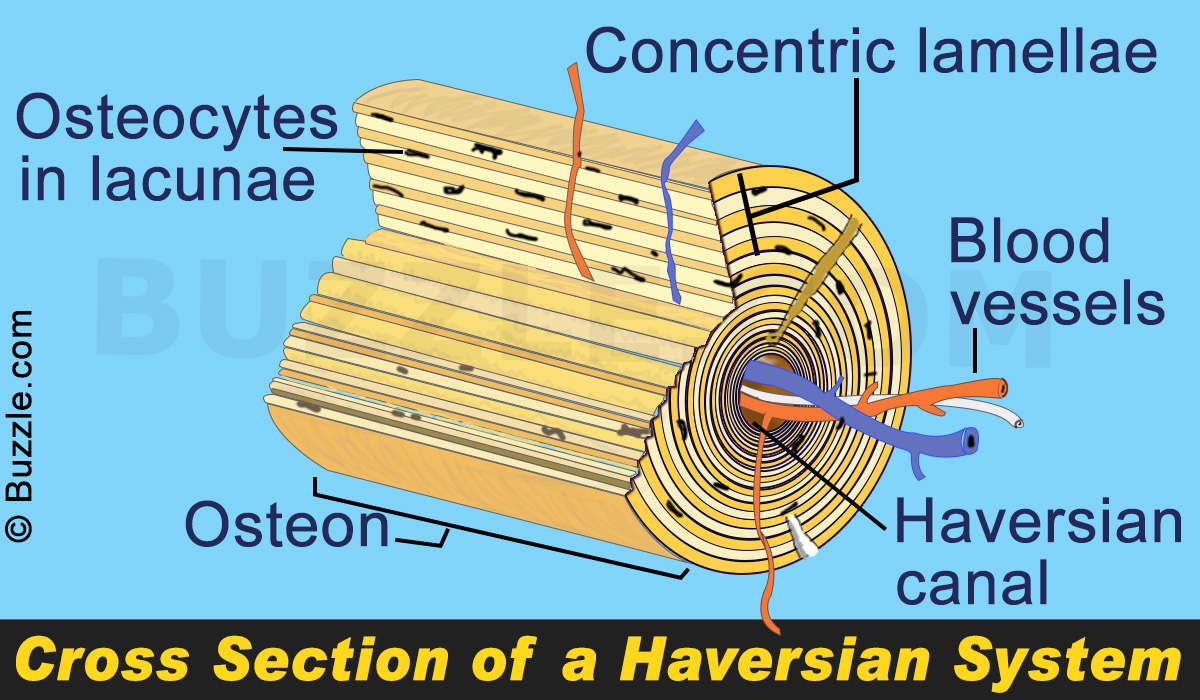 The term ‘Haversian system’ refers to the arrangement of cylindrical-shaped structural units called osteons in compact bones. Bodytomy provides a labeled diagram of the Haversian system to help you understand its structure and function.

The ‘Haversian system’ gets its name from an English physician named Clopton Havers (1657-1702), who is known for his seminal research in the analysis of the microscopic structure of bones and joints. He was the first person to describe Sharpey’s fibers.

The terms ‘osteoblasts’, ‘osteocytes’, and ‘osteoclasts’ refer to three types of specialized bone cells. An osteoblast is a bone-forming cell that secretes several layers of a bone matrix material called osteoid. Osteoid is composed of collagen and mucopolysaccharide. After the osteoid layers are laid down, inorganic salts get deposited in the layers, thereby forming hardened, mineralized bone. The osteoblasts then turn into mature bone cells called osteocytes, when a new bone is being formed. Osteocytes get embedded within the bone matrix, and help maintain the structure of the bone. Osteoclasts are cells that help break down bone, after which osteoblasts help in the formation of a new bone. This process helps maintain the calcium levels. Compact bone and spongy/cancellous bone are the two types of bones in the human body. The former makes up about 80% of the bones of the human body, while the latter constitutes the remaining 20%. The compact bones form the hard exterior of the bones, whereas the spongy bones have several pores that are filled with nerves and blood vessels. The terms ‘Haversian system’ or ‘osteon’ refer to the basic cylindrical-shaped structural unit of a compact bone, which in turn forms a substantial part of the structure of the long bones of the human body. The osteons are closely packed, with osteocytes lined up in concentric rings. This imparts a hard and dense texture to the compact bones.

Though the Haversian canals are named after Clopton Havers, as he described them in detail, a Dutch scientist named Antonie van Leeuwenhoek (1678) was the first person to notice the microscopic canal system in bones. Given below is a labeled diagram to help you understand the structure of compact long bones, as well as the microscopic structure or histology of the Haversian system of compact bones.

Structure of a Long Bone

Only compact bones have osteons as a basic structural unit; spongy bones don’t have osteons.
With the exception of the kneecap, wrist, and ankle bones, all the bones of the limbs are long bones. They are called long bones, as their length is more than their width. They are composed of a shaft and two ends. The osteons run parallel to the long axis of a bone.

While the diaphysis is the shaft that makes up the long axis of the bone, epiphysis refers to the ends of the bone. The ends are covered by a thin layer of compact bone. The ends are wider than the shaft. At the junction of the diaphysis and epiphysis lies the hyaline cartilage. As we grow, the cartilage calcifies to form new bone tissue, thereby allowing the bones to lengthen. Periosteum refers to a double-layered fibrous membrane of connective tissue that covers the outer surface of the bone, with the exception of the articular surfaces. The inner medullary cavities of the long bones are lined by a connective tissue called endosteum. It also covers the canals passing through the compact bone.

It must be noted that osteocytes are living cells, which is why they need nutrition. The osteon comprises several channels which facilitate waste disposal, as well as the supply of nutrients. These canaliculi also help the cells stay connected, as they can make contact with the cytoplasmic processes of other osteocytes through the canaliculi. Thus, the main function of this system is to facilitate the supply of oxygen, as well as nutrients to the bone cells. It is the central canal that is responsible for the nerve supply, as well as the vascular supply to the bone.

Components of a Haversian System

Each osteon has a cylindrical structure that consists of the following components:
✦ Haversian canals are located at the center. Small blood vessels that are present in the central canal perform the function of supplying blood to the osteocytes. The central canal also contains nerve filaments. These canals are connected to each other by Volkmann’s canals, which are transverse vessels that run perpendicular to the long axis. Volkmann’s canals also connect the blood vessels that are present in the central Haversian canals to the periosteum (dense tissue covering the outer surface of the bone). Volkmann’s canals are not surrounded by concentric lamellae.

The Haversian canal is surrounded by the following structures:
✦ Lamellae are concentric rings of a strong bone matrix. Mineral salts and collagen fibers lend strength to the matrix. The collagen fibers in a lamella in an osteon run parallel to one another, but the collagen fibers run in different directions in the lamella that lies next to it. This arrangement also strengthens the osteon. It is the presence of mineral salts such as calcium and phosphates in the matrix that makes the bone hard, whereas collagen fibers strengthen the matrix.
✦ Between the lamellae are small spaces called lacunae. Osteocytes are located within these small spaces.
✦ Tiny channels called canaliculi connect the lacunae. Nutrients are supplied to the osteocytes via these channels. Waste products also leave the osteocytes through these channels.
✦ The remnants of previous concentric lamellae can be found between the osteons. These are referred to as interstitial lamellae.

On a concluding note, the Haversian system or the osteon plays a vital role, as it facilitates the supply of oxygenated blood and nutrients to the bones. Moreover, the network of canaliculi also facilitates the passage of substances between the blood vessels and the mature bone cells.