Different Types of RNA in Humans and their Functions

Both DNA and RNA are present in all living cells, but unlike DNA, RNA comes in various forms and types. Read this Bodytomy post to know what is RNA and what are its main types and functions in humans.

Home / Uncategorized / Different Types of RNA in Humans and their Functions 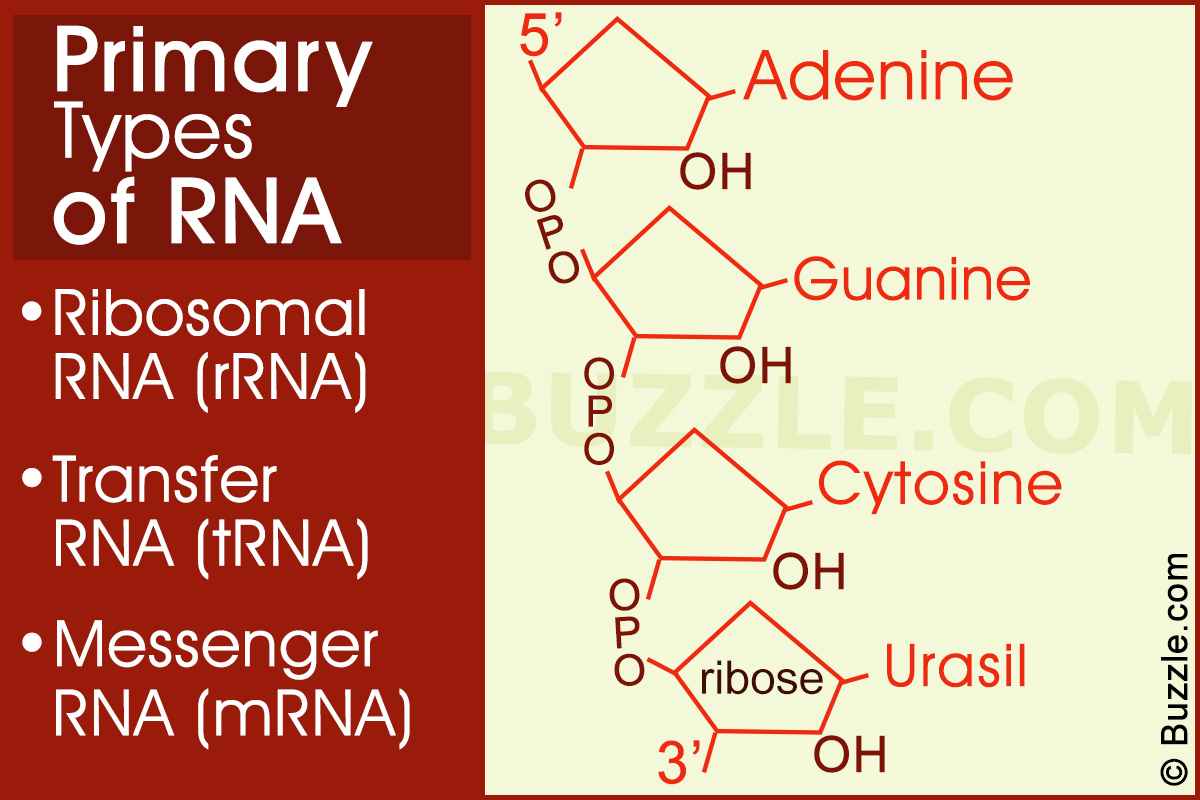 Both DNA and RNA are present in all living cells, but unlike DNA, RNA comes in various forms and types. Read this Bodytomy post to know what is RNA and what are its main types and functions in humans.

DNA, RNA, and proteins, the three major macromolecules, are essential for critical functions in the cells of all known forms of living organisms. DNA, deoxyribonucleic acid, plays an important role in the synthesis of RNA, ribonucleic acid. DNA present inside a cell acts as a genetic blueprint, while RNA acts as a messenger and helps the cells to understand the messages that are stored in DNA. Cells cannot perform their functions without the help of RNA. Different types of microbes and cells can have different forms of RNA molecules.

As you know, protein is essential for almost all biological activities that take place in the human body. Therefore, proper functioning of cells and the body depends upon proper synthesis of proteins. As protein synthesis is one of the major functions of RNA, it is crucial for life. The structure and use of proteins varies according to the linear order of amino acids present in it. DNA contains encoded information (like a building plan or a blue print) about how to assemble amino acids in their correct order to produce usable proteins. Like an architect, RNA conveys the information, and helps execute the plan.

Ribonucleic acid (RNA), a family of large biological, polymeric molecules, is usually present as a single-stranded chain of nucleotides. Although there exist several types of RNA molecules, the basic structure of all RNA is similar. A nucleotide contains a nitrogenous base, a five-carbon sugar (ribose), and at least one phosphate group. Nucleotides are often referred to as the building blocks of nucleic acids. They carry energy (ATP) present in the cells and play an important role in metabolic processes, cell signaling, and enzymatic reactions.

RNA contains only four nitrogenous bases, adenine, cytosine, guanine, and uracil. As the RNA attains maturity, the bases and the attached sugars get modified in several ways. The backbone of RNA strands is made up of groups of phosphates and ribose, to which four bases are attached. RNA strands fold and compress themselves to fit into the tiny space available in a cell.

The principal function of RNA is to carry instructions from DNA and regulate the synthesis of proteins. In some viruses, instead of DNA, RNA carries the genetic information. RNA molecules are produced in the nucleus of human cells from DNA by a process called transcription, but they are found in the cytoplasm too. DNA is present only in the nucleus of the cell.

Ribosomal RNA (rRNA), transfer RNA (tRNA), and messenger RNA (mRNA) are the main types of RNA. Although they play an important role in protein synthesis, they have slightly different functions.

Ribosomal RNA and its Function

In the cytoplasm, ribosomal RNA or rRNA forms ribosomes, that serve as a primary site for building up proteins. They carry the enzymes necessary for protein synthesis. They are the cell organs that work as complex molecular machines and are referred to as protein factories.

They contain a binding site for mRNA and two binding sites for tRNA. rRNA is the most abundant form of RNA. The nucleotides in rRNA are present in a globular form. About 80% of the whole RNA present in a eukaryotic cell is rRNA.

rRNA makes up ribosomes where proteins are made. Ribosomes move along messenger RNA and act as a catalyst in the process of amino acids assemblage that results in the formation of protein chains. It helps create peptide bonds between amino acids in the polypeptide chain. Because of its presence, the polypeptide is made in a correct way during translation.

Thus, rRNA plays a major role in translation. It also holds the single-stranded mRNA in place so that the anticodon of tRNA matches up with the codon of mRNA and forms a code for a specific amino acid. A codon is made up of three continuous nucleotide bases that make a code for an amino acid or bring about the end of translation.

Transfer RNA and its Function

Both tRNA and rRNA are non-coding RNA molecules that play an important role in the process of translation. tRNA constitutes 15% of the total RNA. It has a shape similar to that of a clover leaf. It is a small RNA chain which consists of about 80 nucleotides. It has three hairpin loops. An amino acid attachment site is present at one end. The section in the middle loop is called the anticodon site. It matches the particular area (codon) on mRNA.

tRNA brings amino acids to ribosomes during protein synthesis. tRNA, along with ribosomes, reads the mRNA codes and produces a polypeptide chain that eventually is used to form a functional protein. Most types of cells have 30 to 40 different tRNA molecules, while there exist 20 different amino acids. Thus, more than one tRNA corresponds to each amino acid.

Messenger RNA and its Function

Messenger RNA (mRNA) transcribes the genetic information about a protein sequence, from DNA to ribosomes. mRNA constitutes only 5% of the total RNA. With the help of the cap present at one end, mRNA binds to the ribosome. Along with the genetic information for the amino acid sequence of a protein, mRNA also contains non-coding sequences that may carry operating instructions for the cell. It informs the cell how it should handle the mRNA.

The non-coding section of mRNA can vary in length. Then, there is an initiation codon, which signals the commencement of the coding sequence and at the end, there is the coding region which contains a copy of the genes.

The genetic code and the copy of all proteins made in the body is stored in the DNA. This information is first copied (transcribed) into mRNA. This is the first step in protein synthesis. This process is called transcription. When this is done, the mRNA comes out of the cell nucleus and reaches the cytoplasm of the cell.

In the cytoplasm, mRNA gets bound with the ribosome, which is made of rRNA. Every codon in mRNA corresponds to one amino acid. The tRNA serves as a molecular adapter, and helps build up the protein.

The tRNA binds to mRNA on one end, and carries amino acids towards the correct position at the other end. They connect the amino acids according to the codes provided by mRNA. This is called translation. Thus, the arrangement of amino acids in the protein produced depends upon the coding sequence carried by the mRNA.

The lifespan of mRNA is very short, although it is crucial for protein synthesis. It is constantly broken down by ribonucleases (RNase), sometimes, immediately after translation, even before the complete protein is made. It exists for a couple of minutes, or at the most, for a couple of days. The rRNA and the tRNA are quite stable.

RNA Classification According to their Functions

✦ rRNA
✦ tRNA
✦ mRNA
✦ Signal recognition particle or SRP RNA that governs the transport of proteins across the lipid bilayer.

It can be concluded that the human body functions well as ribonucleic acid (RNA) helps in coding, decoding, regulation, and expression of genes. A problem with DNA can seriously affect the RNA function, and vice versa, because the DNA-RNA function is highly inter-dependent.