Structure of the Human Respiratory System Explicated With Diagrams

If you are interested in understanding the structure and functioning of the human respiratory system, you must read on; for this Bodytomy article provides you with information about the same with images.

If you are interested in understanding the structure and functioning of the human respiratory system, you must read on; for this Bodytomy article provides you with information about the same with images.

The human respiratory system is composed of the nasal passages, the pharynx, larynx, the trachea, bronchi, and the lungs. It is responsible for the process of respiration that is vital to the survival of living beings. Respiration is the process of obtaining and using oxygen, while eliminating carbon dioxide. It is the process by which human beings take in the oxygen from their environment and give out carbon dioxide that is produced as a result of chemical reactions within the cells. The human respiratory system is the specialized system that brings about this critical process in human beings. Let us look at its structure.

Air entering from the nostrils is led to the nasal passages. The nasal cavity that is located behind the nose comprises the nasal passages that form an important part of the respiratory system in human beings. The nasal cavity is responsible for conditioning the air that is received by the nose. The process of conditioning involves warming or cooling of the air received by the nose, removing dust particles from it, and also moistening it before it enters the pharynx.

It is located behind the nasal cavity and above the larynx. It is also a part of the digestive system. Food as well as air pass through the pharynx.

The upper part of the pharynx is called nasopharynx. It is located above the oral cavity, extending from the base of the skull to the upper surface of the soft palate. Located in its posterior wall are adenoids or pharyngeal tonsils. Pharyngeal ostia are located on its lateral walls. Lying behind the oral cavity is the oropharynx. It extends from the uvula up to the hyoid bone and opens into the mouth. Located on its anterior wall are the base of the tongue and the epiglottic vallecula. The tonsil, tonsillar fossa, and tonsillar pillars are located on its lateral wall. The inferior surface of the soft palate and the uvula are located on its superior wall, while the palatine tonsil is located on the lateral wall of the oropharynx. The part of the throat that connects to the esophagus is the laryngopharynx. Located below the epiglottis, it extends to the point where this common pathway diverges into two; the respiratory pathway and the digestive pathway. Food and air pass through the laryngopharynx.

It is associated with the production of sound. It consists of two pairs of membranes. Air causes the vocal cords to vibrate, thus producing sound. The larynx is situated in the neck of mammals and plays a vital role in the protection of trachea.

The intrinsic muscles of the larynx are classified as respiratory and phonatory. The former enable breathing while the latter are responsible for production of sound. The extrinsic muscles support and position the larynx.

This refers to the airway through which respiratory air travels. The rings of cartilage within its walls keep the trachea open. It connects the larynx and the pharynx to the lungs.

Around 1 inch in diameter and 10 to 16 cm long, it extends from the base of the larynx to the level of thoracic vertebra T5. The airway is protected by incomplete C-shaped rings of cartilage. The trachealis muscle connects the ends of these rings. Located towards the rear of the trachea is the esophagus. The epiglottis closes the opening to the larynx, so as to not let the swallowed matter enter the trachea.

The trachea are divided into two main bronchi. The bronchi extend into the lungs spreading in a tree-like manner as bronchial tubes. The bronchial tubes subdivide and with each subdivision, their walls get thinner. This dividing of the bronchi into thin-walled tubes results in the formation of bronchioles. The bronchioles terminate in small air chambers, each of which contains cavities known as alveoli. Alveoli have thin walls which form the respiratory surface. The exchange of gases between the blood and the air takes place through these walls.

They refer to the ways through which air passes through the nose or mouth to the alveoli. Usually, bronchioles are less than 1 mm in diameter. They are supported by elastic fibers attached to the surrounding lung tissue.

They are located where the alveolar ducts and atria terminate. They are wrapped in capillaries. They contain elastic fiber and collagen. The elastic fibers enable their stretching during inhalation of air.

Lungs form the most vital component of the human respiratory system. They are located on the two sides of the heart. They are responsible for transporting oxygen into blood and releasing carbon dioxide from it. The two lungs are not identical. The right lung consists of three lobes while the left one consists of two. The right lung has an almost vertical medial border. The left lung has a cardiac notch that holds the heart. The lobes of the lungs have pleural cavities. The cavity helps lubricate the lungs and also helps the lung surface remain in contact with the rib cage.

This was a brief description of the human respiratory system structure. It is that vital system in our body, which enables us to literally ‘breathe new life’ every instant. 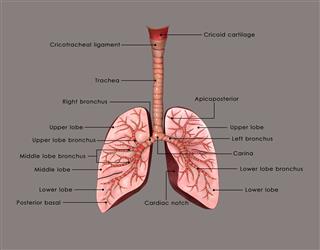 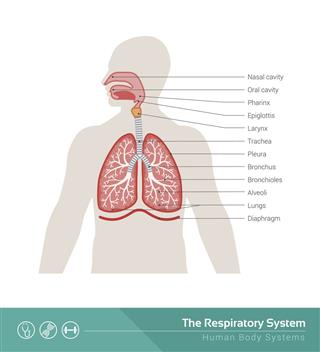