Lymph Nodes in the Neck

The lymph nodes are a part of the protective mechanism of the human body against various pathogens. Their state warns us about various health problems such as an impending infection. To know more about these organs and their functions, read on...

The lymph nodes are a part of the protective mechanism of the human body against various pathogens. Their state warns us about various health problems such as an impending infection. To know more about these organs and their functions, read on… 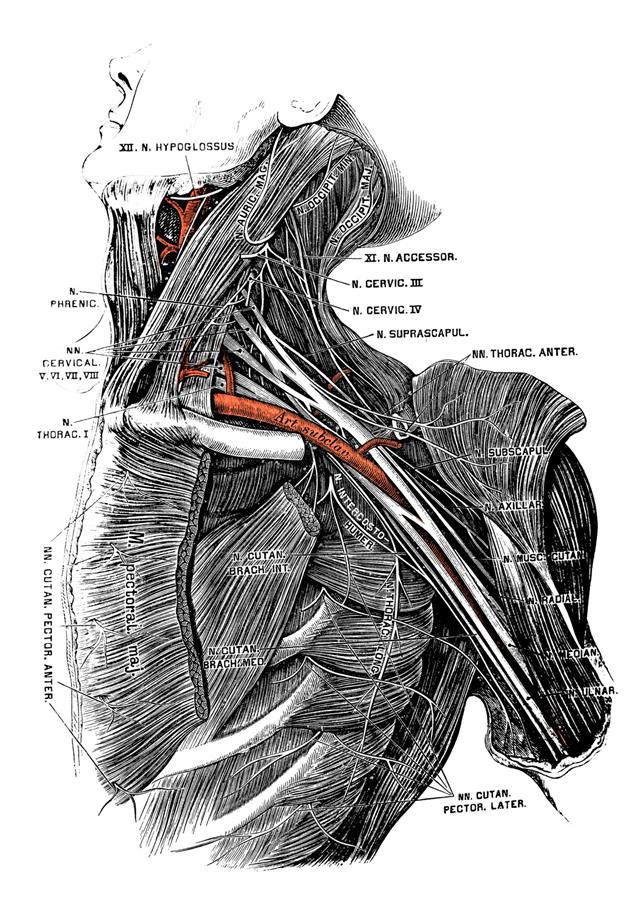 The lymph nodes are bean-shaped organs that contain lymphocytes, a type of white blood cells. Concentration of these nodes is higher in the groin, under the armpits and on both sides of the neck. These are a part of the lymphatic system. They are distributed throughout the body, except the nervous system. This system is an important part of the body’s defense mechanism against foreign bodies. It is a one-way network of lymph capillaries, lymph ducts, lymph nodes and special organs such as the spleen, tonsils, adenoids, appendix, thymus glands and bone marrow.

During blood circulation, a small part of it seeps through the walls of the blood vessels in the form of clear, colorless liquid called lymph. It gets collected in spaces known as interstitial spaces which exist between the body tissues. The lymph is carried from interstitial spaces via capillaries, ducts and nodes, back to the blood circulatory system. Lymph nodes in the neck, in cooperation with the rest of the nodes present in the body, filters the lymph in order to combat pathogens such as, bacteria and viruses present in the lymph. In case of children, nature takes special care of awarding them with larger nodes.

As many as 300 nodes are found in the neck area and collectively, these are called cervical lymph nodes. The following are a few of the node groups that are found in this area.

These are located directly above and beneath the muscle (sternocleidomastoid) which enable you to flex and swivel your head. These are tasked with processing the lymph from the throat, pharynx and glands such as tonsils and thyroid. These are further divided into Prelaryngeal, Thyroid, Pretracheal, Paratracheal.

These are present at the back of your neck, along a line between the Mastoid section of the temporal bone and the clavicle and lies behind the sternocleidomastoids and in front of trapezius. Most often these succumb to respiratory tract infections.

These are situated right below and on either side of your jawbone. They forwards the lymph from the floor of the mouth, tonsillar and pharyngeal (posterior) parts. They also transport lymph from mandibular teeth (except central incisors), maxillary anterior, bicuspid and molars (first and second). Infections of eyes, head, scalp, neck, pharynx, sinuses and ears, in general are the prominent causes of swelling of submandibular lymph nodes. In most of the cases, it is due to tuberculosis, human herpes virus 5, STD, bacterial infection, cat-scratch disease or Epstein-Barr virus.

These are located immediately below the chin and are responsible for flushing lymph from the tip of the tongue, middle of the lower lip and the central incisors. The lymph is drained to submandibular lymph nodes and to deep cervical group.

These are present in the hollow of the clavicle (collarbone) and close to where it joins sternum. Supraclavicular lymph nodes oversee transport of the lymph from the thoracic cavity and abdomen. A lymph node just above the left clavicle is known as Virchow’s node and is the most important node in the transit of lymph from the abdomen. It is the junction where incoming lymph is introduced back into the venous circulation through the left subclavian vein. Its task makes it vulnerable to the various kinds of malignancies. Enlargement of this node may point to presence of lymphoma, any of the different intra-abdominal malignancies, breast cancer or an infection of the arm.

Within the lymph nodes, the lymphocytes such as T-cells and B-cells try to eliminate harmful foreign entities if they are present in the lymph. There are chances of these entities overcoming the immune cells and falling prey to them. Pain is generally associated with infectious diseases. However, the swelling can also be due to various conditions such as common cold, upper respiratory infection, mononucleosis, sore throat, strep throat, viral infection, tuberculosis, tonsillitis, rubella, HIV, AIDS, toxoplasmosis, peritonsillar abscess, epiglottitis, sinus infection, ear infection, cancers (larynx cancer, lymphoma, Hodgkin’s disease, leukemia). A patient with infected lymph nodes may suffer from fever. He may also feel swollen lymph nodes behind the ear, because of an ear infection.

It is most likely that a patient suffering from swollen lymph nodes has contracted some form of throat infection due to a viral or bacterial attack. Strep throat is one of the leading throat infections caused by bacteria. Sending a throat culture to the laboratory and getting it analyzed, is a sure way of identifying its cause. Swelling of lymph nodes that are situated deeper under the skin may cause the swelling of a limb. Generally, in such a situation, there is a blockage to the flow of lymph through node. The doctor may recommend a blood test, CT scan and X-ray of the neck. He might also suggest you to undergo a biopsy to identify the cause of swelling in the neck.

Lymph nodes are very important as they fight microorganisms that have cheated the main body of the white blood cells in the blood. In addition, they maintain fluid levels in the body by transporting and bringing the lymph back into the main circulation. This prevents accumulation of fluids in different parts of the body, denies the microorganisms their breeding grounds and avoid catastrophic situation which could lead to serious health problems. As these body organs perform important functions, it is advisable to take appropriate measures in case you find any of them abnormal.