Location, Structure, and Functions of Sensory Neurons With Diagrams

Neurons are electrically excitable cells that transmit impulses, and this unusual working of the neuron has intrigued scientists for decades. This Bodytomy post provides information on what sensory neurons are, their structure, and how they function in transmitting information from various sensory organs. 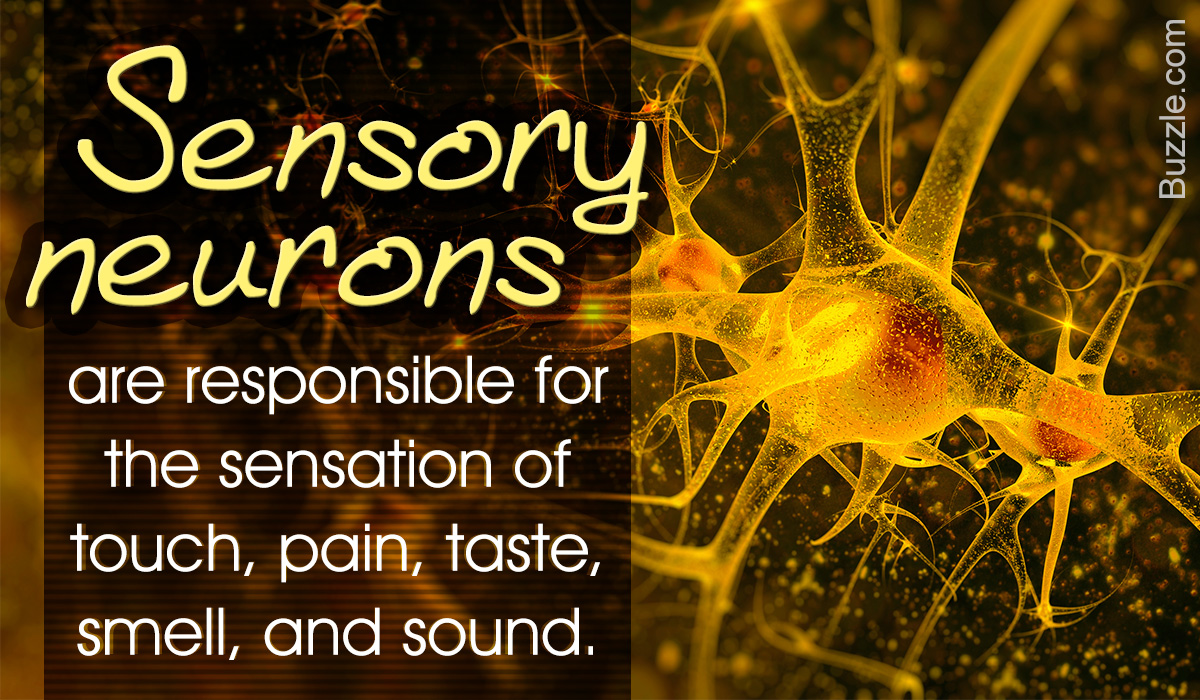 Neurons are electrically excitable cells that transmit impulses, and this unusual working of the neuron has intrigued scientists for decades. This Bodytomy post provides information on what sensory neurons are, their structure, and how they function in transmitting information from various sensory organs.

The nervous system can conduct impulses at a speed of 100 meters per second, at almost 180 miles per hour.

The nervous system of an individual controls and coordinates all its bodily functions. It comprises the central nervous system (CNS) and the peripheral nervous system (PNS). The CNS is made of the brain and spinal cord. The PNS consists of nerves, and it connects the CNS to the organs of the periphery. Neurons are basic functional units of the nervous system. Their function is to conduct nerve impulses. Depending on the type of impulse they conduct, neurons can be classified into sensory neurons, motor neurons, or interneurons.

▶ These are a special type of neurons that conduct sensory information to the CNS. They convert external sensory stimuli like touch, pain, sense of heat, smell, as well as visual and auditory inputs into an internal electrical impulse.

▶ This impulse that is generated at the sensory organs (like eyes, nose, tongue, or skin) is conducted to the CNS via these cells.

The structure of these neurons is somewhat different. These neurons lack distinct axons and dendrites, but have processes that function as both.

▶ The soma of the sensory neurons is present in the dorsal root of the spinal cord. It contains the nucleus and other cell organelles.

▶ The axons that arise from the soma divide into two branches―the peripheral branch and the central branch.

▶ The central branch extends from the soma into the posterior horn of the spinal cord. Here, it forms a synaptic junction with second-order sensory neurons.

▶ The peripheral branch extends from the soma to the receptor cells present on the peripheral sensory organs through the spinal nerves. Due to their morphology, these neurons are called pseudounipolar neurons.

▶ The sensory neurons conduct sensory information like the sense of touch, smell, taste, visual, and auditory inputs to the brain.

▶ This system is responsible for the sensation of touch, pressure, vibration, position of the limb, heat, and pain.

First-order neurons: These carry impulses from the receptor to the CNS via the dorsal root ganglion.

Third-order neurons: These carry impulses from the thalamus to the cerebral cortex.

▶ Mechanoreceptors often coat the axon terminal of the afferent nerve fibers. These receptors respond to mechanical pressure or distortion.

▶ Propioceptors generate a sense of position of the limbs.

▶ Thermoreceptors are responsible for sensation of temperature.

▶ Nociceptors are responsible for the sensation of pain and temperature fluctuations.

▶ This pathway conducts the sensation of pain, temperature, pressure, touch, tickling, and itching.

▶ Here, the first-order neurons extend from the sensory receptor on the receptor cells to the posterior horn of the spinal cord. Here, they synapse with the second-order neuron that extends to the thalamus.

▶ The second-order neurons synapse with the third-order neurons, which extend and terminate in the primary somatosensory area of the cortex.

▶ This pathway conducts sensations of fine touch, position of the limb, vibration, and stereogenesis.

▶ The retina of the cell has a layer of photo-receptor cells, i.e., rod cells and cone cells.

▶ Retinal ganglion make the optic nerves, and these conduct impulses generated by photoreceptors.

▶ The optic nerves cross over at the optic chiasm.

▶ After the chiasm, the axons are called the optic tract. The optic nerves synapse with the Lateral Geniculate Nucleus (LGN) present in the mid-brain. The LGN spreads into the primary visual cortex.

▶ Sound information is converted to nerve impulses by hair cells. Sound vibrations cause the displacement of hair cells.

▶ This displacement causes the cells to depolarize, and an impulse is generated.

▶ This impulse is conducted via the vestibulocochlear nerve, where the cochlear nuclei synapse with the superior olivary complex present in the brain-stem, which then synapses with the inferior colliculus present in the mid-brain.

▶ The inferior colliculus finally conducts the impulse to the primary auditory cortex, passing via the thalamus.