Structure and Functions of the Reticular Activating System

The reticular activating system (RAS) is one of the most important parts of the brain. This article is a short introduction to the system's functions and the way it influences human behavior.

Home / Uncategorized / Structure and Functions of the Reticular Activating System 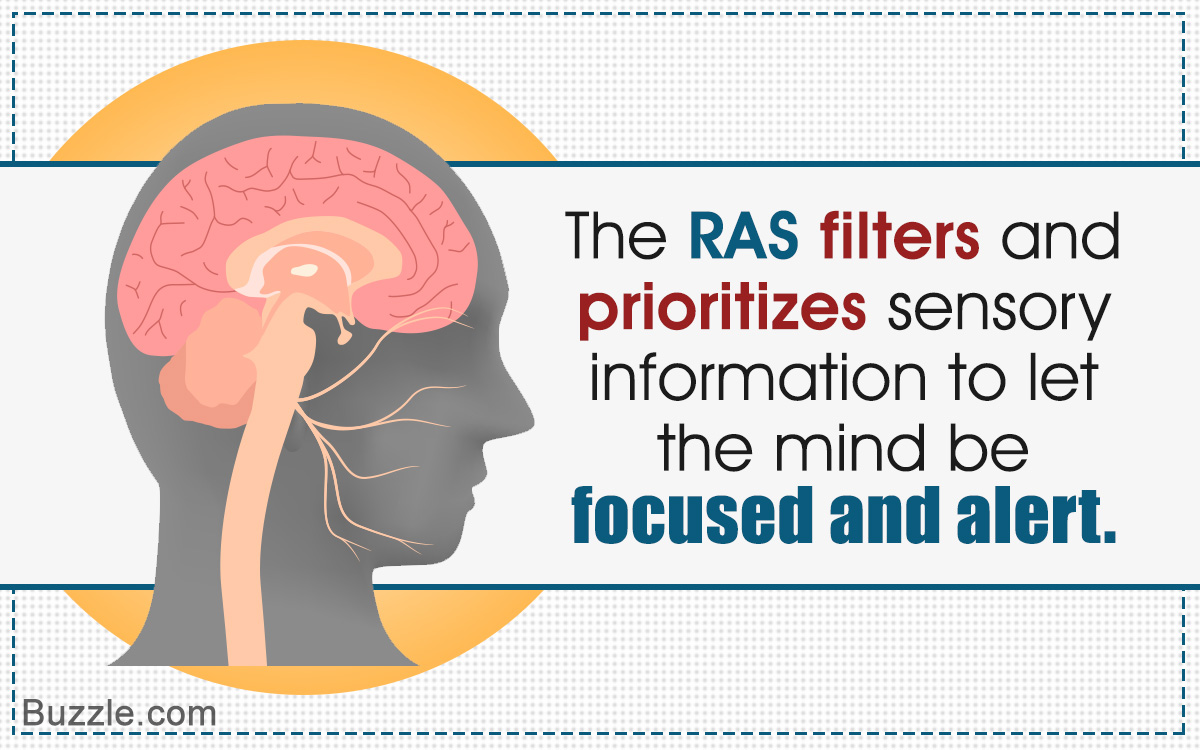 The reticular activating system (RAS) is one of the most important parts of the brain. This article is a short introduction to the system’s functions and the way it influences human behavior.

The reticular activating system (RAS) acts like the ignition system of the brain, that awakens an individual from sleep to a state of heightened awareness.

Every conscious or unconscious function of the mind can be traced back or mapped to some part of the brain, which is one of the most complex organizations of matter in the universe. The mind is projected by the brain and its every process has an origin in some actual neuronal network.

This article talks about a brain region that significantly affects cognition and plays a large role in the sleep-wake transition.

Research in neuroscience has revealed, that the reticular activating system (RAS) is responsible for many cognitive functions related to awareness. This was revealed through study of mammalian brains. Evolutionarily, it is one of the oldest regions and it plays a big role in shaping the survival instinct in humans, besides acting as a bridge between the higher and lower parts of the brain.

Let us explore the location, structure, and functions of this system, which is also known as extrathalamic control modulatory system or bulboreticular facilitatory area.

The reticular activating system connects the brain stem, to the cerebral cortex, through various neural paths. The stem controls most of the involuntary functions, as well as reflexes of the body, while the cerebral cortex is the seat of consciousness and thinking abilities. The system forms a link between these two different regions, helping our consciousness put together an internal world, through assimilation of sensory information, gathered from all body parts.

A large part of the system consists of brain parts that are responsible for our survival instincts. Hence, it has a deep connection with awareness functions of the brain. The main parts which constitute the RAS are:

RAS functions are controlled by certain cholinergic (related to acetylcholine) and adrenergic (related to Adrenaline) neurotransmitters. In terms of neuron grouping, this brain region constitutes the raphe nucleus, the pedunculopontine nucleus, and the locus caeruleus, all situated in the brain stem. For the sensory signals traveling towards and away from the cerebrum, this system acts as the gateway. In fact, the nerve fibers of this region are known to make the connection between body and mind. For the RAS to be triggered, signal activity needs to occur in the sensory pathways, that are connected with it. 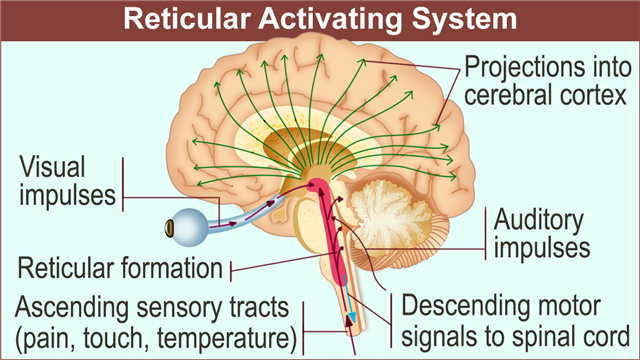 In a state of wakefulness, all the sensory information that reaches the brain stem (including touch, smell, visual, and temperature signals), from the various afferent nerves, is transmitted via this system, to the cerebrum for processing, after undergoing filtering. Pain felt in any part of the body, is relayed through the reticular formation.

The Flight or Fight Response

When we encounter a threat, that demands immediate defensive or offensive action, the electrical signals from sensory neurons are relayed to the cerebral cortex for processing, via the RAS.

One of the major functions of this specialized brain circuitry is the regulation of transition between sleep and wakefulness. The transition that we make from deep sleep to being fully awake and functional, as well as the reverse function, is controlled by this region. This functionality is mediated through the monoaminergic and cholinergic pathways.

All the mind’s functions manifest themselves physically, as electrical activity in the brain. The transition from sleep to wakefulness is therefore a change in the electrical activity associated with certain brain regions, measured in terms of frequency of the electrical signals. The state of wakefulness in humans, is associated with low-voltage fast burst brain waves. The same kind of waves are also associated with the REM (Rapid Eye Movement) phase during sleep. On the other hand, during non-REM sleep, the activity of high-voltage slow waves is predominant. The RAS orchestrates the transition from sleep to wakefulness, by promoting the creation of gamma band (20-40 Hz) waves and suppressing slow waves in the brain, like the spindle wave oscillations (11-14 Hz), delta waves (1-4 Hz), and slow waves in the cortex (0.3-1 Hz). This transition is reversible. Sleep is possible, only through the suppression of RAS activity, that is, through a reduction of afferent nerve activity, which transmits sensory signals to the cortex.

During non-REM sleep, which is mostly dreamless, RAS is shut down, thus cutting off connections with sensory inputs. This inhibition of the system is facilitated by the preoptic nucleus neurons.

The ability to filter out information from external sources and focus on one particular fact, detail, or thought is controlled by this brain region. If it weren’t for this circuitry, our consciousness would be overwhelmed and flooded with all sensory information, leading to an inability to make decisions. The system helps in prioritizing information and controls what appears in the mind’s eye, at any point of time.

Recent research has revealed that this region is also responsible for bringing your mind into periods of heightened attention, alertness, or higher focus. This function is primarily mediated by the reticular formation and the thalamic intralaminar nuclei, which experience an increased blood flow, during these times.

It is responsible for providing an integrated (cardiovascular, respiratory, and motor) response to external stimuli. It also controls coordination during walking, sexual functions, and eating.

Connections of the reticular formation with motor neurons facilitates maintenance of balance, posture, and tone, when executing various body movements. It enables the cerebellum to integrate vestibular, visual, and audio inputs, to process the data for motor coordination.

This system also plays a role in REM sleep, when we experience dreams. It is responsible for muscle atonia (temporary paralysis or relaxation of muscles) experienced during these phases.

Not only does RAS filter out information, but it also learns to identify patterns in the sensory signals transmitted through it. The reticular formation gets habituated to excluding meaningless and repetitive signals, that are deemed to be consistently unimportant. That explains why people can sleep through any kind of noise, once they have become habituated to it, while waking up in a startled state, to an auditory signal like a gunshot.

The raphe nuclei, a part of the reticular formation, work with the suprachiasmatic nucleus (SCN) to maintain the circadian rhythm. It provides information about the level of alertness of the individual to the SCN, for it to act accordingly.

Damage to this system can lead to a transition into coma. Because of its positioning at the back of the brain, this area is very vulnerable to damage during accidents. Brain researchers have linked disorders in the RAS to attention deficit disorders, Alzheimer’s disease, narcolepsy, and sleep disorders.

Anesthetics and psychotropic drugs directly affect this system, causing a transition into unconsciousness or semi-consciousness. There is a relation between our action of setting goals and the RAS, as it controls the ability to focus and sift through incoming information. Overall, it manages the transition between levels of consciousness and controls what we prioritize as our current reality.