A set of tiny bones in the human ear are known as middle ear ossicles. These are some of the smallest bones in the body that play a vital role in the auditory system.

Ear is an important organ of the sensory and auditory system of the human body. In the working mechanism of the human ear, that involves detecting and transmitting sound and keeping body equilibrium, different parts of the ear have their own important contribution. Human ear comprises three parts, namely, outer ear, middle ear and inner ear.

As one can judge, the sound waves enter the auditory system through the outer ear and they pass through the middle ear, to reach the inner ear. There are various other parts involved in this entire process, that hold the key to proper hearing mechanism. One of such essential parts of the human ear is middle ear ossicles.

Ossicle, which is also called auditory ossicle is a tiny part of the ear, which is located in the middle ear region. The word ossicle is derived from the Latin word Ossiculum that literally means tiny bone. The term ossicles may also refer to the smaller bones of the human body. 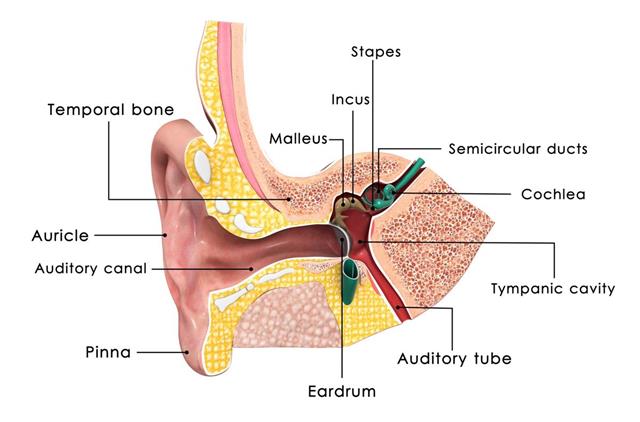 Ossicles which are present in the middle ear, are made of three tiny bones that have their own separate names and characteristics. Their Latin etymology might be a result of their appearance or the way they look. These names are namely, malleus or hammer, incus or anvil and stapes or stirrup.

Starting from the eardrum to the inner ear or from the outer side to the inner side, they are sequenced as malleus, incus and stapes. Let’s find out more about these parts.

Malleus or the hammer is made of two principal parts, namely, the manubrium and the chorda tympani. The manubrium is cohered with the tympanic membrane and head, with two processes, namely lateral process and anterior process. Area between the head and manubrium is the neck of the malleus.

The chords tympani on the other hand is in fact a branch of the facial nerve that intersects medial surface of the neck of the malleus. Head of the malleus is located in the epitympanic recess, which is a location superior to the tympanic membrane.

Incus is made of three principal parts that include a body, one short process and one long process. Heads of the incus and malleus are articulated. The smallest region of the incus, which is present at the end side of the long process is known as the lenticular process, and it articulates with stapes and the head.

The short process on the other hand is attached to the cavity wall with the help of the posterior incudal ligament. Similar to the malleus, head of the incus also resides in the epitympanic recess.

Stapes is made of four principal parts that make it look like a stirrup. These parts include, a footplate, posterior crura, anterior crura and stapes head. Head of the stapes and lenticular process of the incus are articulated. The footplate covers the fenestra ovalis or oval window of the inner ear cavity.

Middle ear and the ossicles play a vital role in the overall working of the human ear. Middle ear works like a hydraulic press with its effective area being almost 21 times larger than the footplate of stapes. As a result, the force which is created by the atmospheric sound pressure gets concentrated at the footplate, through the auditory ossicles.

The increased pressure also increases the proportion between the two parts. In humans, this ratio is 21:1. The larger size of the rotating lever arm of the malleus is longer than that of the incus and hence there is increase in the pressure.

Overall equation derived by calculating the eardrum and footplate ratio and lever arm size differences, creates a lot of increment in the ear pressure that counts up to 29 DB (decibel).

When sound waves pass through the outer ear and vibrate the tympanic membrane of the eardrum, the membrane starts moving to the nearest of the middle ear ossicles, which is the malleus. These vibrations are then transmitted by the malleus, through incus to the stapes. At the end, these vibrations reach to the oval window which is the opening of inner ear.

As we can see, ossicles give a huge mechanical advantage to the eardrum and make it a vital part of the auditory system. They perform important functions of sound distribution and force reduction. Without the ossicles, sound waves would directly pass to the inner ear and cause least amount of vibrations, thereby reducing hearing abilities.

It is important to understand that its functions are controlled by muscles called stapedius and tensor tympani, so that the inner ear stays protected from loud sound waves. A few conditions like otosclerosis and damaged bones may cause problems in proper functioning of the ossicles and lead to hearing impairment and other ear problems.