The immune system is a network of cells, tissues, and organs that form our body's defense mechanism and collectively provide protection from pathogens and toxic antigens. There are many interesting facts about the immune system.

The immune system is a network of cells, tissues, and organs that form our body’s defense mechanism and collectively provide protection from pathogens and toxic antigens. There are many interesting facts about the immune system.

One of the early descriptions of immunological memory dates back to the fifth century BC, when Thucydides published in his book ‘History of the Peloponnesian War’, an observation, that soldiers who had recovered from a disease were the best nurses for the freshly affected soldiers, because the recovered soldiers never caught the same disease twice, and if they did, it was never fatal.

The human body is an amazing machine that has evolved into a multicellular and complex structure from a single cell. It is self-sufficient and performs every physical, biological, chemical function without any glitch. The human body takes the required vitamins and minerals to carry out the basic body functions and mechanisms from healthy food and drinks that we consume.

Organs of the Immune System

The bone marrow is the production house for blood cells, namely B cells, natural killer cells, immature thymocytes, red blood cells and platelets. This process of production of blood cells is called hematopoiesis.

This is the site where immature thymocytes migrate and develop into mature T cells. In this bilobed organ located above the heart occurs a process of selective deletion of T cells that show immune activity against the body itself. Thus, the T cells released out from the thymus are well-equipped to attack the foreign bodies and\or pathogens only, and not the cells or tissues of the body itself.

These encapsulated bean-shaped structures are the site for filtration of lymph and trap antigens that enter the tissue spaces. The antigens are filtered through the lymph nodes and the macrophages and dendritic cells capture these antigens and present them to the T and B cells, thus evoking a full-fledged immune response.

Located in the abdominal cavity, this oval-shaped organ specializes in filtering out antigens present in blood. This is also a site where the interaction between the antigens and the immune cells occurs. It has zones of tissues filled with B cells producing antibodies against the trapped antigens, macrophages, and dendritic cells that engulf the antigens and present a part of them on their surface. It is also serves as the destruction site and graveyard for old red blood cells.

Lymphocytes are the major cells of the immune system, and are responsible for diversity, specificity and memory creation. They are aided by and triggered by several other white blood cells.

These cells develop and mature in the bone marrow and are responsible for the synthesis of proteins called antibodies. They are defined as ‘specialized proteins that specifically recognize and bind to a particular antigen’. This binding of the foreign body signals other cells to kill or engulf the unwanted substance. They are displayed by B cells on the cell surface and are also released into blood.

These cells are produced in the bone marrow but develop and mature in the thymus. T cells are mainly classified into T helper cells (Th cells) or cytotoxic T cells (CTL). Th cells have molecules called CD4 (cluster of differentiation 4), whereas CTLs have molecules called CD8 (cluster of differentiation 8). The T helper cells are used to potentiate immune responses by activating white blood cells to ward off an infection. The CTLs are directly involved in killing tumor and infected cells.

These are cells capable of engulfing foreign particles, viruses, bacteria, parasites etc., killing them and presenting derivative antigens on the cell surface. Such cells are termed professional antigen presenting cells (APCs). They not only kill the pathogen but also educate and activate other cells to mount a response against it.

These also serve as professional APCs and are more efficient than macrophages as far as antigen presentation is considered. They capture the antigens and bring it to lymphoid organs initiating an immune response. In addition, they are also involved in selecting the self-reactive immune cells, and inducing suicidal mechanisms in bodies like the purkinje cells.

These killer cells are true to their name as they kill tumor cells, virus-infected cells like herpes, and cytomegalovirus infected cells, as well as parasite-infected cells. These cells can identify antibody-bound foreign antigens and pathogens, and thus selectively engulf and destroy them.

These are white blood cells characterized by granules in their cytoplasm and lobular nuclei, which gets stained differently with different dyes, forming the basis for classification into eosinophils (get stained with acidic dye), basophils (get stained with basic dye) and neutrophils (both acidic and basic dyes). They engulf foreign substances and destroy them using enzymes. Basophils are nonphagocytic cells and release active substances that give rise to an allergic response.

Interesting Facts about the Immune System

The specific immune reactions that occur in the lymph nodes, blood and other body tissues are termed ‘adaptive immune system’, and is required when the innate system fails to prevent the entry or growth of the foreign body. However, in general most of the microbes are readily cleared by the innate immune system.

At times, the immune system goes into a ‘hyperdrive’ and reacts inappropriately against certain antigens. This is termed ‘hypersensitivity’, and leads to an allergic reaction characterized by reddening and rashes at the site of contact as well as sneezing.

There are four phases of an immune response: recognition, activation, amplification of defense, suppression, and memory creation.

The environment plays an important role in affecting our immune response. Toxic substances, air pollution, pesticides, and cigarette smoke affects the defense system of our body. The circadian rhythms and sleep-wake pattern influences immune function. Lack of sleep has been shown to alter leukocyte numbers, proliferation and function.

Each microliter of blood has about 4500 to 10,00 white blood cells, that is, over 50 billion cells in the entire body. One may lose about five million WBCs when donating blood, and still be left with enough to fight a full-fledged immune response.

Stress affects normal immune functions like reduction in the activity of NK cells and lymphocytes as well as antibody production due to stress hormones like cortisol, norepinephrine etc. Such suppression of the immune system makes the body more susceptible to infections and may also lead to reactivation of latent viruses. Hence stress-busters like massages, relaxation techniques etc. not just help to relieve psychological stress, but also help to maintain the efficiency of the immune system.

After an insect bite or mosquito bite one observes a red, itchy bump on their skin. This is a sign that the immune system is at work, and acting against the foreign substances that have entered through saliva of the insect.

‘Laughter is the best medicine.’ This is not just an old saying but laughter induces a proactive immune response that leads to a healthy body.

Our body has a defense mechanism that is stronger, more organized and more efficient than the strongest armies in the world. In order to keep the body’s defense system impregnable, it is essential to follow a nutritious diet and exercise routine as well as avoid addiction to tobacco, alcohol, and narcotics. Stay stress-free and keep laughing for a stronger immune system. 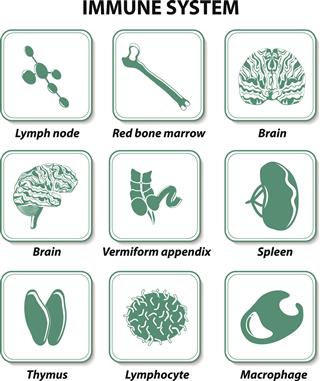 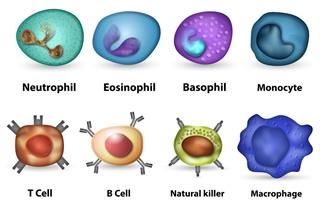 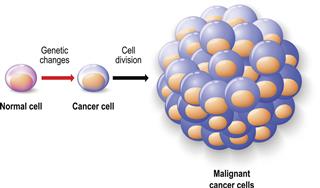