Diagrams! They remind me of school textbooks which used to have plenty of them, providing a visual aid to understanding difficult subjects. This article explains the nervous system function and structure with the help of a human nervous system diagram and gives you that erstwhile 'textbook feel'. Read on. 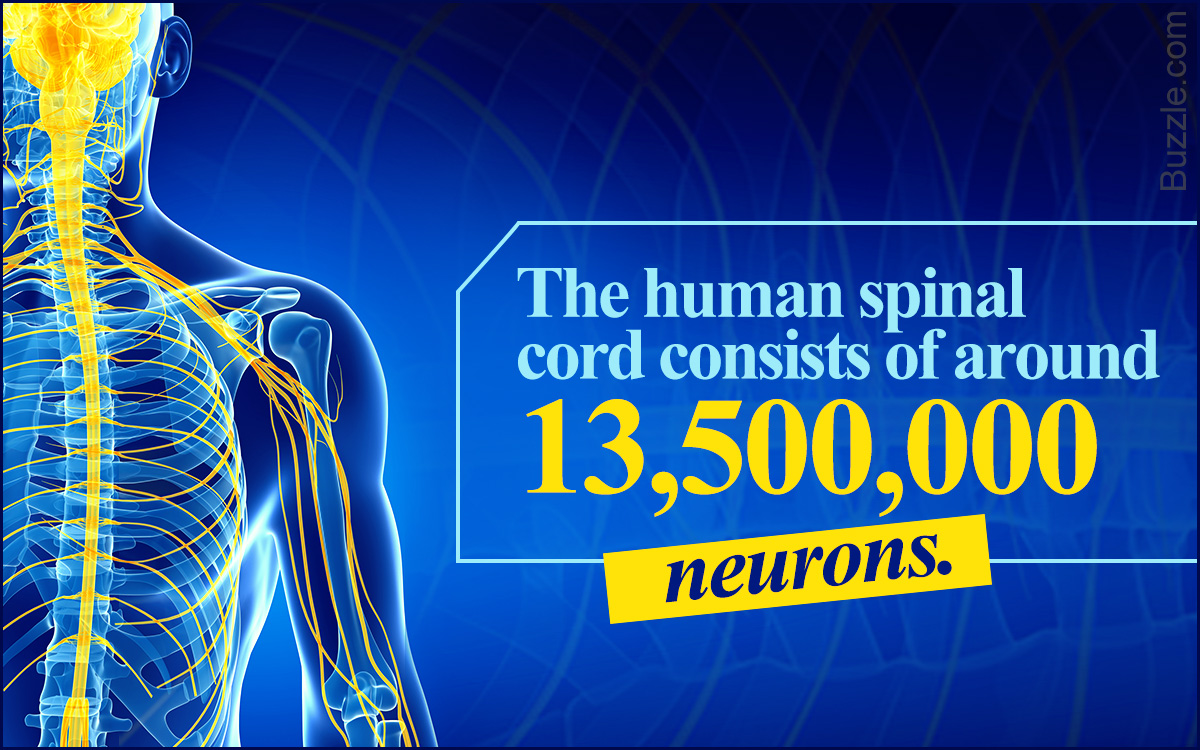 Diagrams! They remind me of school textbooks which used to have plenty of them, providing a visual aid to understanding difficult subjects. This article explains the nervous system function and structure with the help of a human nervous system diagram and gives you that erstwhile ‘textbook feel’. Read on.

The thought of diagrams brought back memories of school days; the scent of those textbooks; the sight of the classroom and my teacher’s voice that said, “C’mon class, open your science books, page 41, chapter 3, Human Body Systems”. Studying human anatomy became interesting, thanks to her. She used to say, “The human body systems are the most accurately engineered machines that possess an intellect of their own. Look at the brain, for example; man will never be able to replicate its intricate design or recreate intelligence and emotion”. It was wonderful to pick up the intricacies of a seemingly boring subject like human anatomy from her. She was a person who looked at science through a philosopher’s eye.

Reading this article will be like reading about the human nervous system from your science textbook as this article carries a labeled human nervous system diagram to help you understand its design and working. For me, diagrams and illustrations that textbooks carried, were always of great help in understanding the topic. It was the labeled animal cell diagram that ‘magnified my image’ of the microscopic cell. It was the skeletal system diagram that helped me understand the “skeleton” of human bodies. And it was when I first studied the diagram of a human heart, I realized that the heart is not exactly heart-shaped!

Neuron can be considered as the basic unit of the nervous system, which processes and transmits information by means of electrochemical signals. Sensory neurons respond to external stimuli that affect the sensory organ cells. Motor neurons, on receiving signals from the central nervous system, bring about responses at the target organs. Interneurons act as the connectors between neurons. Neurons are of different shapes and sizes and their complex interconnections add to the complexity of the nervous system. The human brain contains 86.1 billion neurons.

Glia or glial cells, as they are called, are non-neural cells that play a vital role in maintaining homeostasis and protecting the brain’s neurons. The glial cells surround the neurons to hold them in place, supply them with oxygen and nutrients, isolate the neurons from one another and remove dead neurons. The human brain contains about 84.6 billion glia; that’s almost equal to the number of neurons it contains. 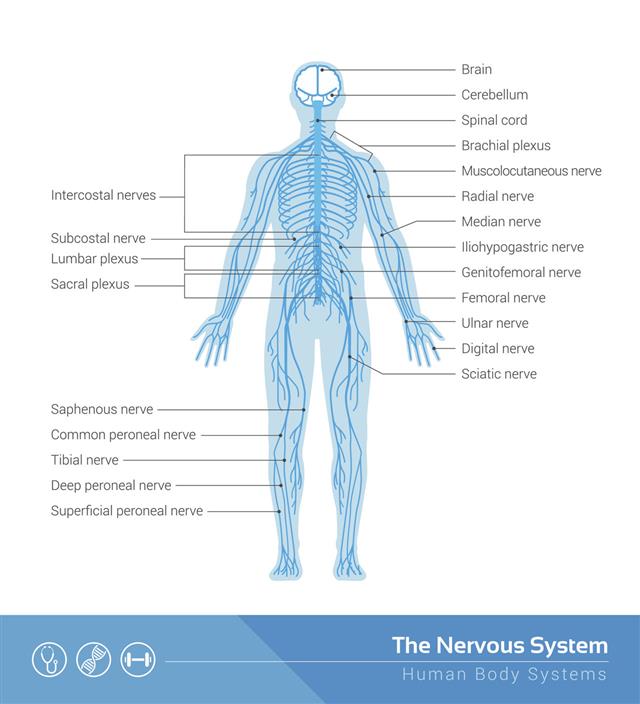 The brain is the center of the human nervous system and is a highly complex organ. Even a brainiac won’t find it very easy to understand the brain! The human brain is about three times larger than the brain of a typical mammal.

The brain can be said to have three main parts, the brain stem, the cerebrum and the cerebellum. The cerebrum is associated with information storage and processing; the cerebellum is responsible for balance, posture and coordination of movements; and the brain stem plays a vital role in controlling breathing and heart rate along with some other important body processes. Along with the skull, the brain is also protected by the cerebrospinal fluid in which it is suspended. It’s strange yet true that the brain floats in a fluid!

The spinal cord is a long tubular structure composed of nervous tissue and support cells. It is around 45 cm long in men and 43 cm long in women. It extends from the brain up to the space between the first and the second lumbar vertebrae. It transmits neural signals between the brain and other body parts. It is the spinal cord which connects the brain and the peripheral nervous system. It consists of about 13,500,000 neurons.

Musculocutaneous Nerve
It is a part of the brachial plexus. It runs through the neck, the armpit area and ends in the arm. It serves the bicep muscles and the skin of the forearm.

Radial Nerve
It is also a part of the brachial plexus. It supplies the triceps brachii muscle of the arm and a part of the forearm along with its associated joints and skin.

Median Nerve
It is one of the main nerves that originate from the brachial plexus. It runs down the arm and enters the forearm. The median nerve is the only nerve passing through the carpal tunnel.

Iliohypogastric Nerve
It originates from the first lumbar nerve and supplies the abdominal muscles along with skin of some parts of the abdominal wall.

Obturator Nerve
It is a mixed nerve that arises from the lumbar plexus. It supplies the adductor, gracilis and obturator externus muscles. It also supplies a part of the skin of the thigh, hip and knee joints.

Genitofemoral Nerve
It arises in the lumbar plexus and bifurcates into two branches, namely, genital and femoral. Its branches run through the skin of the scrotum and to the upper anterior aspect of the thigh.

Ulnar Nerve
It runs near the ulna bone and is directly connected to the little finger and half of the ring finger. It supplies the tips of these fingers and the far back of the fingernail beds. It is the largest nerve which is unprotected by muscle or bone.

Common Peroneal Nerve
Also known as the common fibular nerve, it is half the size of the tibial nerve and originates from the branches of the lumbar and sacral nerves. It runs obliquely along the side of the depression at the back of the knee joint to the head of the calf bone.

Tibial Nerve
The tibial nerve is a branch of the sciatic nerve. It passes through the depression at the back of the knee joint, where it gives off an articular branch to the knee joint and a cutaneous branch that becomes the sural nerve.

Saphenous Nerve
It is the largest cutaneous branch of the femoral nerve. It supplies cutaneous branches to the skin of the leg and foot in the region between the knee and the ankle.

Sciatic Nerve
Also known as the ischiatic nerve, the sciatic nerve is a nerve fiber that begins in the lower back and ends in the lower limb. It supplies the skin of the leg and the muscles of the leg, foot and back of the thigh.

Pudental Nerve
Originating in the sacral region of the spinal cord, it is formed from the second, third and fourth sacral nerves. It is located in the pelvic region and it supplies the external genitalia of both men and women.

Femoral Nerve
It is located inside the leg and supplies muscles that help in bending and straightening the leg. It is the largest branch of the lumbar plexus.

Subcostal Nerve
It is the vertical branch of the 12th thoracic nerve and supplies some parts of the abdominal muscles. It supplies branches to the skin of the lower abdominal wall and the gluteal region. It passes along the border of the 12th rib.

The literal meaning of plexus is network. In human beings, rather all vertebrates, the area where nerves branch and rejoin, is known as a plexus. The four main nerve plexuses in the human body are cervical plexus, brachial plexus, lumbar plexus and sacral plexus. Here is a brief description of each of them.

Brachial Plexus
The arrangement of nerve fibers formed by the ventral rami of the lower cervical and upper thoracic nerve root, precisely between the nerve roots of the 5th cervical and 1st thoracic vertebra, is known as the brachial plexus. It runs through the neck, the armpit region and then into the arm.

Sacral Plexus
This plexus supplies nerves to the posterior thigh, lower leg, foot and a part of the pelvis. It is formed by the 4th and 5th lumbar nerves and the 1st, 2nd and 3rd sacral nerves. Nerves of the sacral plexus join to form a flattened band, which later forms the sciatic nerve.

Lumbar Plexus
Formed by the ventral divisions of the first four lumbar nerves, the lumbar plexus is located in the lumbar region of the body. It passes through psoas major, where it supplies some smaller motor branches. Some of its larger branches run through the pelvic area. 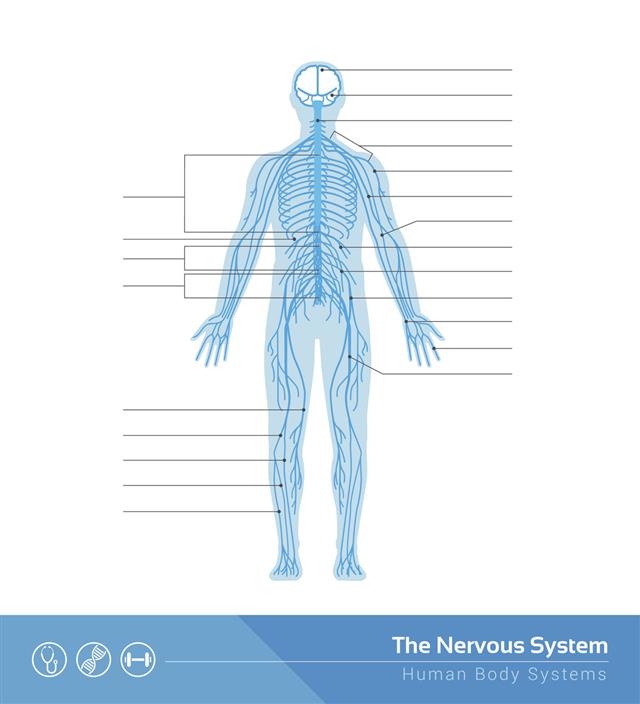 I will conclude the article with what my teacher had said after she finished her lessons on human nervous system. She had said, “The nervous system, rather any human body system is definitely not very easy to understand. Studying human anatomy is in fact, understanding the most complex and intelligently crafted machines. And understanding complexities can never be simple. But making the complex appear simple is what only God can do.” 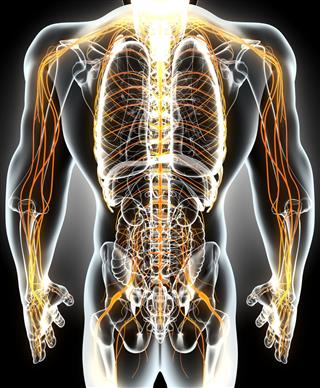 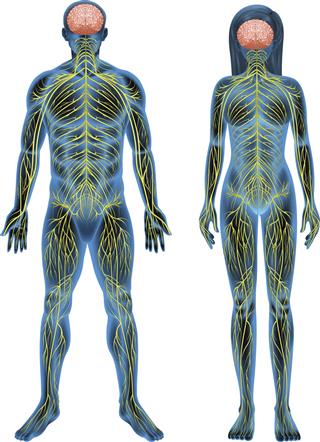