How is Steroid Hormone Different from Peptide Hormone?

Hormones are chemicals that are produced by the endocrine glands. These travel through the blood to a target tissue and organ, where they produce a specific effect. In this Bodytomy write-up, we will provide information on the difference between steroid and peptide hormones.

Home / Uncategorized / How is Steroid Hormone Different from Peptide Hormone?

Hormones are chemicals that are produced by the endocrine glands. These travel through the blood to a target tissue and organ, where they produce a specific effect. In this Bodytomy write-up, we will provide information on the difference between steroid and peptide hormones.

The term ‘hormone’ was coined by English physiologists William M. Bayliss and Ernest H. Starling. They are also credited with discovering the first hormone called secretin, in 1902.

It is the part of the brain called hypothalamus that acts as a link between the endocrine system and the nervous system. The hypothalamus produces certain releasing hormones that stimulate the secretion of certain hormones by the pituitary gland, which in turn cause specific effects in the target tissues or organs of the body. It must be noted that the location of receptors in the target cell varies, depending on the type of hormone. Steroid and peptide hormones also differ in terms of the location of the receptors. 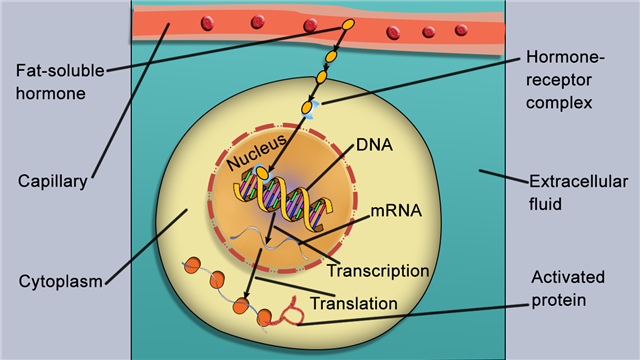 While receptors of certain hormones are present in the nucleus of the target cell, some might be located in the cell cytoplasm or on the surface of the cell membrane. For the hormone to cause the intended effect, it has to attach to a specific receptor at the target cell. The receptor is basically a protein synthesized by the target cell. Once the hormone binds to the receptor, a chain of events takes place, which eventually leads to the generation of proteins. These proteins perform several vital functions, such as producing enzymes that accelerate vital chemical reactions or other vital cellular processes. Let’s understand the formation of hormone-receptor complex in case of steroid and peptide hormones. 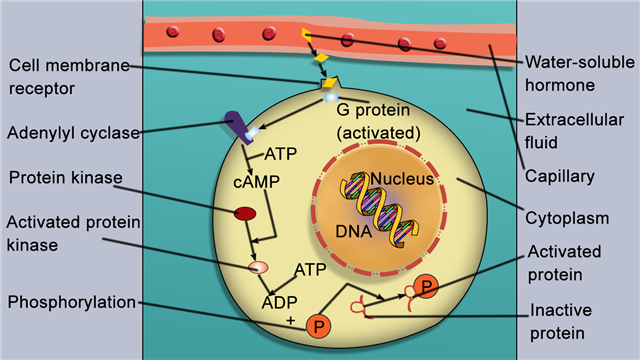 As the peptide hormone binds to a receptor on the surface of the cell membrane, it activates a signaling pathway that induces intracellular activity. Receptors for peptide hormones are proteins and glycoproteins embedded in the cell membrane that travel across the membrane at least once. This allows the receptor to come in contact with the extracellular, as well as intracellular environment. There are different types of cell surface hormone receptors that facilitate the synthesis of proteins that are required for bringing about the intended effect of the peptide hormone. The hormone that triggers the signaling pathway is referred to as the first messenger. For instance, in some cases, the hormone-receptor complex activates a G-protein (first messenger) that is also located in the membrane.

The subunits of G-protein bring about changes in other effectors such as enzymes (adenylate cyclase or phospholipase C) or ion channels. This leads to the production of a second messenger, such as cyclic AMP. Cyclic AMP binds to protein kinase A, which activates this protein and leads to phosphorylation (the addition of a phosphate group to a protein or organic molecule) of other proteins. Thus, the process involves a cascading signal transduction, which can lead to a series of events causing multiple changes in the target cells. This might stimulate mitosis, secretion, or an increase in the uptake of a molecule.

Receptors can also carry out other functions. For instance, the receptor for insulin also acts as an enzyme. It can also add a phosphate group to tyrosine residues, which serve as sites where the downstream signaling proteins can fit. Thus, the second messenger in the cytoplasm can affect the concentration of proteins that already exist within the cell. The second messenger might activate enzymes and cellular proteins. These might also alter gene expression. Insulin, glucagon, somatostatin, adrenocorticotropic hormone, antidiuretic hormone, and prolactin are some of the examples of peptide hormones. These hormones regulate vital bodily processes such as metabolism, lactation, growth, and reproduction.

Steroid hormones can diffuse across the lipid bilayer of the plasma membrane of the target cell to bind to the receptor on account of being fat-soluble. In case of a steroid hormone, specific regions of the receptor carry out specific tasks such as identifying the hormone, binding and forming the hormone-receptor complex and attaching to a specific region on chromosomal DNA, and regulating the transcriptional complex. The formation of this hormone-receptor complex leads to the activation or release of associated proteins. After moving into the nucleus, the complex binds to regions of DNA that are located near specific steroid-regulated genes.

On a concluding note, the major difference between steroid and peptide hormones is that the former is lipid-soluble and can diffuse easily into the cell membrane of the target cell to connect with receptors, whereas the latter is water-soluble and connects with receptors at the membrane because it can’t diffuse through the membrane. Since peptide hormones bind to receptors at the surface, their effect is faster than steroid hormones. Both these hormones perform vital bodily functions, and any problems in the working of these hormones and their receptors can have a serious repercussion on one’s health.