The endocrine system is a collection of glands that secrete various chemicals called hormones. These are messages that pass signals through the blood to a targeted organ. The receptor cells recognize these messages and act accordingly. Hormones are divided into three classes based on their structure:

The steroid hormones are derived from cholesterol after a series of biochemical reactions. They pass through the bloodstream, and are not stored by cells. The production of this hormone depends on the rate of synthesis. The peptide hormones are synthesized as precursor molecules. Endoplasmic reticulum and Golgi bodies process these chemicals that are stored in secretory granules, which further help in their secretion into the blood stream, as and when the body demands it. The amine hormones are stored in the cytoplasm as granules till needed.

There are over 20 major hormones that are pumped into the bloodstream directly by the endocrine system glands. This system organs consists of the following glands in human begins:

Antidiuretic hormone (vasopressin)
Helps the kidneys to retain water, and controls blood pressure in the presence of aldosterone.

Corticotropin (ACTH)
Controls production and secretion of hormones of the adrenal glands.

Oxytocin
It causes muscles of the uterus and milk ducts in the breasts to contract.

Prolactin
It starts and maintains milk production in the mammary glands.

Thyroid-stimulating hormone
It controls the stimulation, production, and secretion of hormones of the thyroid gland.

Parathyroid hormone
It regulates the formation of bones and excretion of calcium and phosphorus.

Calcitonin
Its function is still unclear, but in other species, it regulates calcium balance.

Aldosterone
It helps in regulation of salt and water balance by their retention and excretion of potassium.

Dehydroepiandrosterone (DHEA)
It affects the bones, mood, and the immune system

Glucagon
It helps in raising the blood sugar level.

Insulin
This chemical helps in lowering the blood sugar level, and affects the metabolism of sugar, protein, and fat throughout the body.

Estrogen
It helps in the development of female sex characteristics and the reproductive system.

Progesterone
Prepares the lining of the uterus for implantation of a fertilized egg, and readies the mammary glands to secrete milk.

Testosterone
It controls the development of sexual characteristics in men and the reproductive system.

Cholecystokinin
It controls the gallbladder contractions that cause the bile to enter the intestine, and stimulates release of digestive enzymes from the pancreas.

Glucagon-like peptide
This chemical increases the releasing of insulin from the pancreas.

Ghrelin
It controls the growth hormone release from the pituitary gland, and causes a sensation of hunger.

Resistin
It blocks the effects of insulin on muscle.

Estrogen and progesterone
It helps keep the uterus receptive to the fetus and placenta during pregnancy. 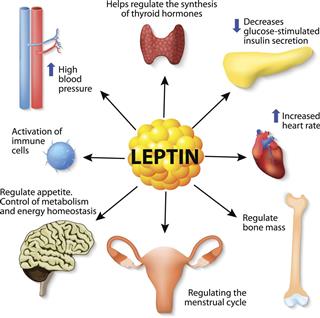 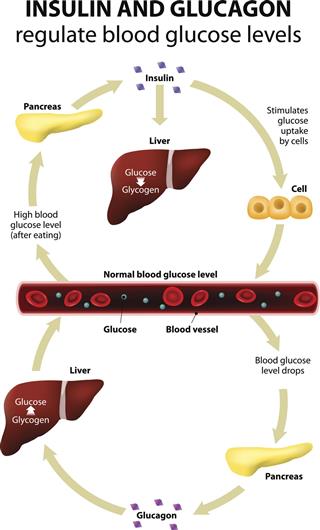 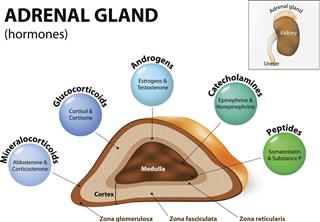 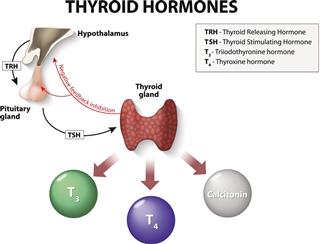 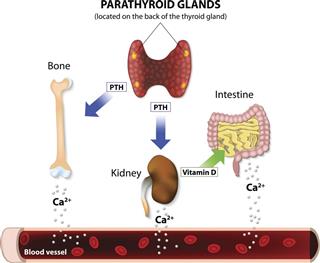 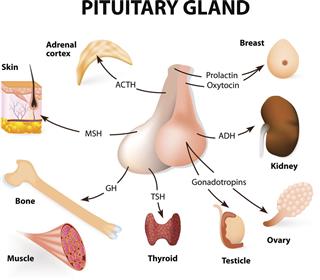 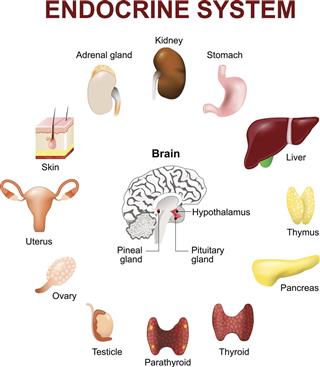 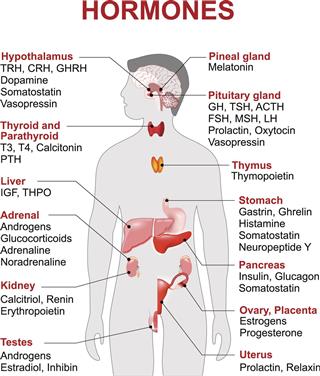