Anatomy and Function of the Occipital Bone Explained With a Diagram

The occipital bone is a trapezoid-shaped bone that forms the posterior wall and the base of human skull. Bodytomy explains the anatomy, diagram, and function of the occipital bone.

The occipital bone is a trapezoid-shaped bone that forms the posterior wall and the base of human skull. Bodytomy explains the anatomy, diagram, and function of the occipital bone.

When we nod, we use the atlanto-occipital joint, which is the joint located between the atlas (vertebra C1) and the occipital bone. This joint helps in the flexion and extension of the neck.

Forming the posterior surface of the skull, the occipital bone articulates with the two parietal bones, sphenoid bone, two temporal bones, and the atlas (first cervical vertebra). The term ‘occipital’ is derived from the Latin word ‘occiput’, which in turn is derived from the prefix ‘ob’ (which means against) and ‘caput’ (which means head). The prominent occipital bone characteristics or features include the external occipital protuberance and crest, occipital condyles, and the superior and inferior nuchal lines. 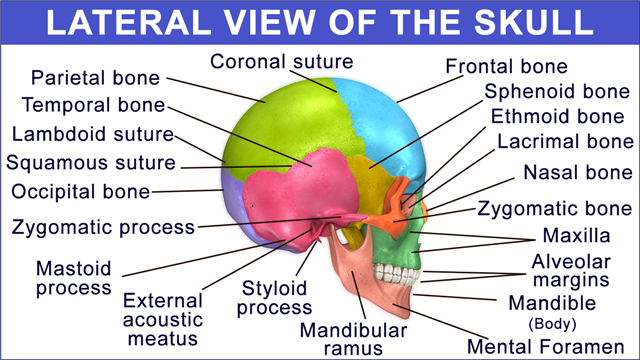 Lateral view of the skull

At birth, the aforementioned parts develop separately, and are joined by cartilage, thereby forming a ring around the large opening called foramen magnum. It is only around the age of six years that these four parts unite to form a single bone. The squamous section, which is formed by a concave, posterosuperior plate behind the foramen magnum, makes a major part of the occipital bone. The basilar section is located in front of this foramen. The two lateral sections are located on either side of the foramen magnum.

Besides the medulla oblongata, meninges, subarachnoid space, the tonsils of the cerebellum, and other anatomical structures pass through the foramen. These include ligaments (apical ligament of dens, cruciform ligament of atlas, and membrana tectoria), anterior and posterior spinal arteries, vertebral artery, meningeal branches (C.N.1 to 3), sympathetic plexuses, spinal vein, spinal roots of the accessory nerve, etc.

The occipital bone provides attachment for a number of muscles of the neck, as well as the upper section of the back. These include:

The squama, which is an expanded plate that is located above and behind the foramen magnum, is convex externally and concave internally. The major features of this region include:

Four nuchal lines are present on the external surface of the occipital bone. These include: 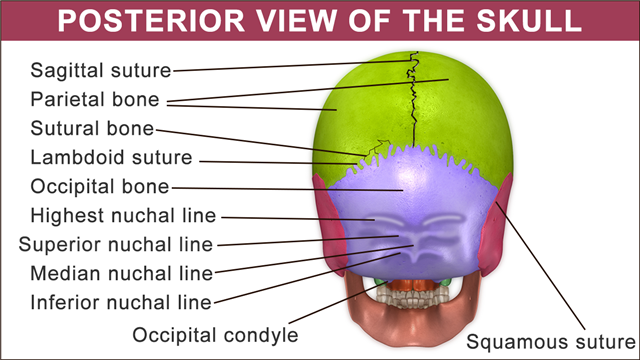 Posterior view of the skull

➠ The highest nuchal line, which extends on either side from the external occipital protuberance to the mastoid process of the temporal bone, is the site of attachment for galea aponeurotica (muscle that covers the upper part of the cranium).

➠ The superior nuchal line, which lies below the higher nuchal line, serves as a site of attachment for the trapezius, sternocleidomastoid, and splenius capitis muscles.

➠ The medial nuchal line, which is also called external occipital crest, begins at the external occipital protuberance and runs down to the foramen magnum. It also serves as a site of attachment for the nuchal ligament that is present at the back of the neck.

➠ Extending laterally on either side from the middle of the medial nuchal line is the inferior nuchal line that almost runs parallel to superior nuchal line. It serves as a site of attachment for the semispinalis capitis muscle.

Grooves are present on the internal surface due to the presence of the dural venous cranial sinuses (venous channels that drain blood from the brain to the jugular foramen) such as the superior sagittal sinus, the transverse sinuses, and the sigmoid sinus. The angle of the union of the superior sagittal and transverse sinuses is called torcular herophili, and it appears as a depression on one or other side of the protuberance. Grooves for the transverse sinus run horizontally from the left and right of the internal occipital protuberance and continue into the indentations or grooves for the sigmoid sinus.

The margins of the transverse occipital sulcus serve as a site of attachment for the tentorium cerebelli (a compartment or fold created by the dura mater, which is outermost membrane that encloses the brain). The dura creates dural folds called falx cerebri and the tentorium cerebelli. Falx cerebri separates the right and left hemispheres of the brain, whereas tentorium cerebelli separates the cerebrum (the largest part of the brain in the anterior that comprises the two hemispheres) from the cerebellum (part of the brain that is situated above the medulla oblongata and beneath the cerebrum). In the upper division, to the right, is the groove that accommodates the rear part of the superior sagittal sinus. To the margins of this sulcus are attached the falx cerebri. The lower division serves as a site for attachment to the falx cerebelli. Occipital sinus lies in the attached margin of falx cerebelli. The term ‘vermian fossa’ refers to a small cavity or depression present in the lower part of the internal occipital crest that is occupied by part of the vermis of the cerebellum.

Located laterally to the foramen magnum on either sides, the condylar parts consist of two kidney-shaped prominences. These prominences are referred to as occipital condyles. These articulate with the atlanto-occipital joint (first cervical vertebra C1). The capsules of the atlanto-occipital articulations are attached to the margins of condyles. A bony protuberance for the attachment of the alar ligament is present on the medial side of each of these condyles. A short, bony canal called the hypoglossal canal (anterior condyloid foramen) is present at the base of each of these condyles. The hypoglossal or twelfth cerebral nerve exits through the canal, and the meningeal branch of the ascending pharyngeal artery enters through it.

Condylar fossa lies behind each condyle, and the opening for the condylar canal lies at the bottom of the fossa. The jugular notch is located on the side of the condyle. The groove for the signoid sinus lies on the cerebral surface of the bone, near the jugular notch. The emissary veins (connecting veins in the head and the scalp that drain blood from the dural sinuses to veins outside the skull) pass through these canals from the transverse sinus. 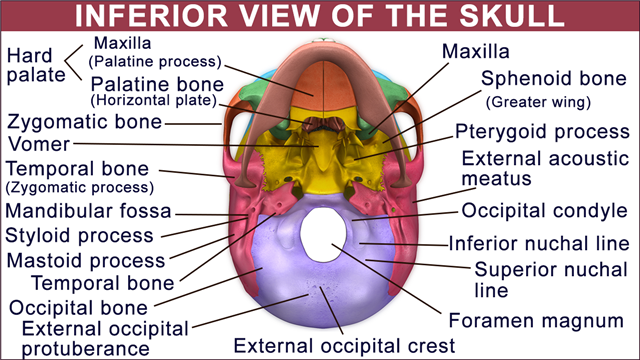 Inferior view of the skull

The jugular tubercle, an oval-shaped eminence in the upper surface of the lateral section, lies above the hypoglossal canal. Glossopharyngeal, vagus, and accessory nerves pass through the oblique grooves lying in the posterior of the tubercle.

A shallow indentation or groove that extends upward and forward from the foramen magnum lies on the upper surface of the basilar part. Besides providing support to the medulla oblongata, it serves as a site of attachment to the membrana tectoria, near the margin of the foramen magnum. Small grooves for the inferior petrosal sinus are present on the lateral margins of this surface. In children, the basilar part connects to the body of the sphenoid bone by a cartilaginous plate. It is only after the age of 25 years, that this plate ossifies, and the occipital and sphenoid bone become continuous.

On a concluding note, the occipital bone plays a vital role in the human body, as it not only protects the brain and supports the back of the head, but also facilitates the communication between the cranial cavity and the vertebral column through the foramen magnum that is located at its center.