Awesome Information About the Location and Functions of the Amygdala

The amygdala, which refers to the almond-shaped structure located on either side at the lower end of the hippocampus, is a part of the limbic system of the human body. This Bodytomy write-up provides information on the location and function of the amygdala. 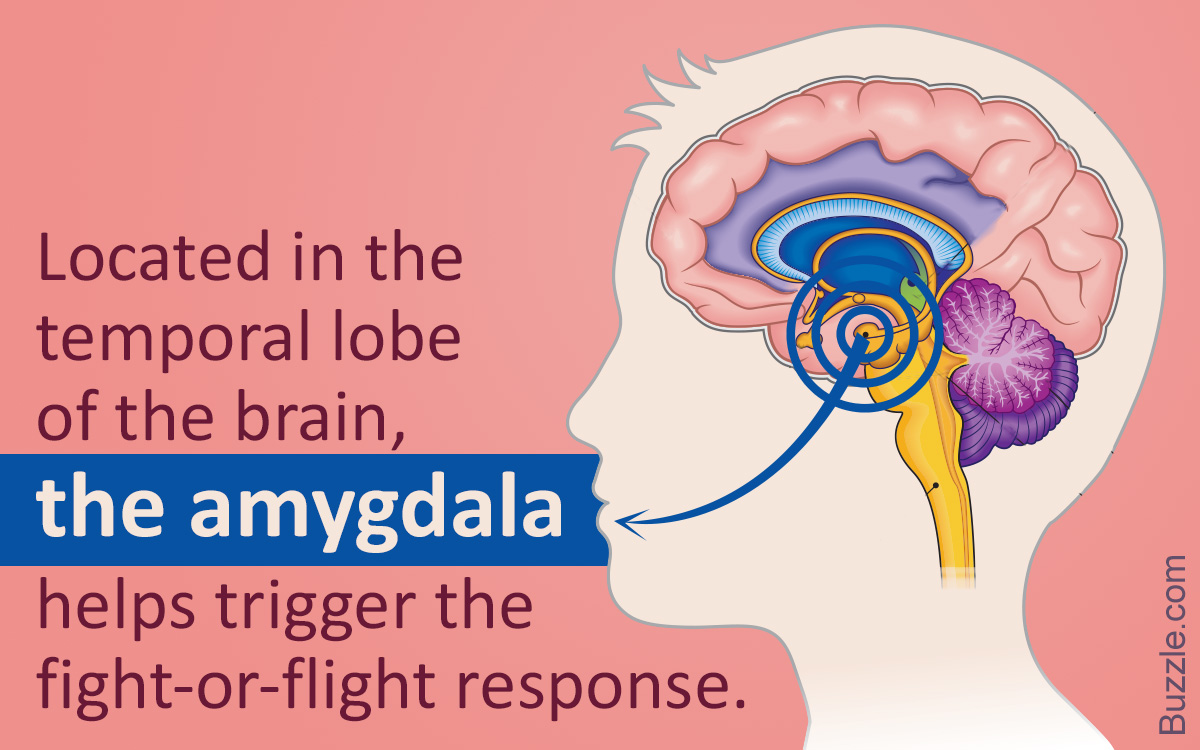 The amygdala, which refers to the almond-shaped structure located on either side at the lower end of the hippocampus, is a part of the limbic system of the human body. This Bodytomy write-up provides information on the location and function of the amygdala.

Both hippocampus and amygdala play a vital role. The hippocampus performs a host of functions related to consolidation of long-term memory, emotions, etc. The amygdala, which is located deep within the temporal lobe of the brain, is responsible for our memory, response to emotions, hearing, and speech.

Also known as the amygdaloid body or amygdaloid nucleus, the amygdala is basically made up of several nuclei, which are further divided into subnuclei. The amygdala works in tandem with several parts of the brain such as the hypothalamus, thalamus, hippocampus, parahippocampal gyrus, cingulate gyrus, septal nuclei, orbital frontal cortex, and the brainstem. Several studies have been conducted on the role of amygdala in connection to the processing of emotions, especially fear.

Location of the Amygdala

Cerebrum, which refers to the anterior portion of the brain, is divided into two hemispheres, which are further divided into four lobes called frontal, parietal, occipital, and temporal. Amydala, along with hippocampus and olfactory cortex lies on the medial surface of the temporal lobe.

It is basically a mass of nuclei that is divided into regions. There are varied views about the division of the amygdala. For instance, Price (1980s) refers to three regions called basolateral, cortical, and central medial group. At times, it is divided into regions called the cortico-medial region and the basolateral region. The cortico-medial region, which includes the cortical, medial, and central nuclei, is connected with the olfactory system. It is believed to have evolved earlier than the basolateral region, which comprises the lateral, basal, and accessory basal nuclei.

While the basolateral region receives inputs from thalamus, primary sensory cortex, and polysensory cortex, the cortical region receives direct input from olfactory bulb and olfactory cortex. The central medial group receives input from hippocampus, orbitofrontal, insula, anterior cingulate cortex, as well as basolateral group. There are different views about this structure. While De Olmos and Heimer refer to the concept of an extended amygdala, Swanson refers to the amygdala neither being a structural nor functional unit of the cerebral hemispheres.

The amygdala gets sensory (particularly auditory, visual, and olfactory stimuli) and visceral inputs, with the sources of the latter being the hypothalamus, septal area, orbital cortex, and parabrachial nucleus. While the olfactory sensory information comes from the olfactory bulb, the sensory (auditory, visual and somatosensory) information comes from the temporal and anterior cingulate cortices. Due to its connections with the emotive centers in the brain, the amygdala is central to our emotions. It sends impulses to the hypothalamus, and regulates emotional, as well as aggressive behavior. It also plays a role in the release of estrogen and growth hormone, which in turn can affect our behavior.

Functions of the Amygdala

The amygdala plays a vital role in coordinating our responses (behavioral, autonomic, and endocrine) to the environmental stimuli. It plays an extremely important role in behavioral/reflexive responses that are central to survival during stress. It is also instrumental in fear conditioning, as well as the fight-or-flight response. During the fight-and-flight response, the impulses from the central nucleus of amygdala are sent to the central gray matter in order to stimulate a reflex to stop the perilous activity. The impulses to the lateral hypothalamus help elevate the blood pressure and heartbeats, so as to prepare the body for a quick response. Impulses are sent to the facial nerves, which in turn generate facial expressions that reflect anger, fear, etc. The impulses to the paraventricular hypothalamus are responsible for the secretion of the stress hormones. The norepinephrine, dopamine, serotonin, and acetylcholine increase the intensity of the fight-or-flight response, which is integral to survival during such situations.

Various studies have shown that the amygdala has a vital role in emotional processing, especially fear conditioning. One of the studies suggesting the link between amygdala and emotional behavior was conducted by Heinrich Kluver and Paul Bucy in 1939. In this study, the temporal lobes on both sides (including the amygdala and hippocampus) were removed in monkeys. Thereafter, a change was observed in their emotional behavior. The monkeys became tame. There was an increase in their sexual activity.

Studies have also shown that the amygdala gets activated by emotional stimuli, such as emotional expressions. In a rare disorder (Urbach-Wiethe disease) characterized by isolated lesions of amygdala, the patients are unable to differentiate emotions in facial expressions.

Changes in the amygdala have been found in people affected by psychiatric conditions such as PTSD, phobia, depression, schizophrenia, autism, etc. This might be due to the fact that amygdala plays a vital role in fear conditioning, and these disorders are associated with fear and anxiety.

In case of a perceived threat, a part of the stimulus goes directly to the amygdala. If the amygdala perceives a fight-or-flight situation from the past experiences recorded in the hippocampus, it triggers the HPA (hypothalmic-pituitary-adrenal) axis. It the stimulus is not threatening, it acts according to the directions received from the neo-cortex (rational brain). The term ‘amygdala hijack’ was coined by Daniel Goleman in 1996. It refers to a situation when the emotional response is not in accordance with the stimulus. It is characterized by the sudden onset of a strong emotional reaction. Later, the individual realizes that the reaction was inappropriate.

The main function of amygdala is emotional and social processing. It gets many connections from the hippocampus, which is involved in the storage and retrieval of explicit memories and processing the context of a situation. It is believed that these connections might be responsible for strong emotions that might be triggered by specific memories. It processes and stores memories of emotional events and is also involved in emotional responses. It is believed that due to its role in processing of emotional significance of the stimulus, it might be involved in perception.

Until the 19th century, the existence of amygdala was not even known to man. Now, amygdala function can be understood by going through the pioneering works of several scientists like Ursin & Kaada, Blanchard & Blanchard, Weiskrantz, Heimer, Kapp, McGaugh, LeDoux, & Davis. For instance, in the 1930s, researchers found that damage to the temporal lobe caused changes in fear reactivity, sexual behavior, and feeding behavior. Later, around the mid century, it was found that emotional processing changes were observed in the event of damage to amygdala.

On a concluding note, the amygdala performs the vital role of processing information and coordinating emotional behavior in response to sensory stimulus. Moreover, it is integral to emotional stimuli that are related to fear. Its role in triggering the fight-or-flight response and fear conditioning has been studied extensively.