The thalamus is an important part of the complex nervous system in human beings. In this Bodytomy article, we shall find out what it is, where it is located, and what its major functions are. 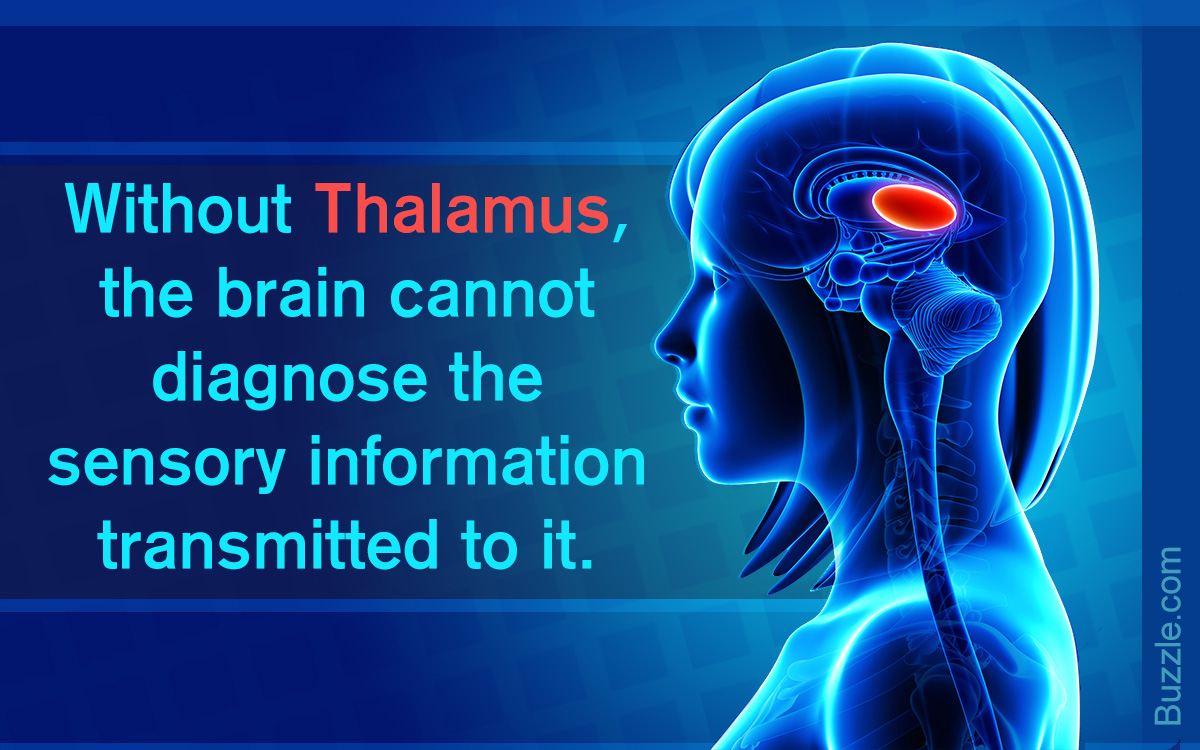 The thalamus is an important part of the complex nervous system in human beings. In this Bodytomy article, we shall find out what it is, where it is located, and what its major functions are.

The word thalamus is derived from the Greek language, and means a room or a chamber.

The thalamus is a part of the brain, which is located at its very central region. It is a dual-lobed olive-shaped mass, about one inch in length, and forms the larger dorsal subdivision of the diencephalon.

The thalamus is part of the limbic system, and connects the areas of the cerebral cortex responsible for motion control and sensory perception with the other parts of the brain which too are involved in the same functionality.

Basically, the thalamus detects and relays information from all the senses, such as vision, touch, and others (except smell), along with motor control, to the appropriate places in the cerebral cortex. It also regulates consciousness and sleep. It acts as a synaptic integration center, that performs the preliminary processing of all the sensory and motion-related information on its way to the cortex.

In the following sections, we shall find out where the thalamus is located, and study some of its important functions in the nervous system.

Location of the Thalamus

In humans, the thalamus can be divided into two halves, which are prominent bulb-shaped masses located obliquely and symmetrically on either sides of the third ventricle.

Functions of the Thalamus

The thalamus is composed of many nuclei having sensory, motor, and limbic connections. Some of the nuclei are nonspecific in nature. These nuclei help it in receiving inputs from the many cortical and sub-cortical structures. Mentioned below are a few of the important bodily systems and the thalamic nuclei that are associated with them.

The input from the retina of the eyes which is relayed to the brain through the optic nerve is received by the lateral geniculate nucleus of the thalamus. It then relays it to the primary visual cortex in the occipital lobe.

The medial geniculate nucleus of the thalamus relays information between the inferior colliculus of the mid-brain and the primary auditory cortex.

The ventral posterior nucleus in the thalamus is an important somatosensory relay that is responsible for transmitting information relating to touch and proprioception to the primary somatosensory cortex.

A major role of the thalamus is related to the motor control system of the body. It performs the positive reinforcement of the non-reflex motor behavior initiated by the cortex. The following are the thalamic nuclei associated with motor control, along with their specific functions:

The thalamus is part of the limbic system which is responsible for combining higher mental functions and primitive emotions into one system. The following are the thalamic nuclei involved in this.

The following are some other functions that the thalamus performs.

The thalamus has strong reciprocal connections with the cerebral cortex, forming the thalamo-cortico-thamlamic circuits, which take care of consciousness. It plays a major role in regulating arousal, wakefulness, level of awareness, and activity. Thus, any damage to the thalamus carries with it the risk of comatose.

Together with the brainstem and the higher cortical areas, the thalamus plays an important role in a human’s ability of filtering out insignificant information, and directing attention towards the stimuli of interest by allowing the related information to pass. This allows parents, for instance, to sleep soundly through the loud noises of rainfall and wind, but be instantly aware of their child’s slightest whimpering.

Thalamus is also capable of a crude awareness of many other types of sensations in the body, without being able to identify their specific location or intensity.

To sum up, the thalamus is an important part of the brain located near its center. It is responsible for relaying sensory and motor-related signals to the cerebral cortex, and regulating the states of consciousness, sleep, and alertness.