The Undeniable and Wonderful Role of Proteins in Living Organisms

Rightly regarded as one of the building blocks of life, proteins do much more than just nourish our body.

Rightly regarded as one of the building blocks of life, proteins do much more than just nourish our body. 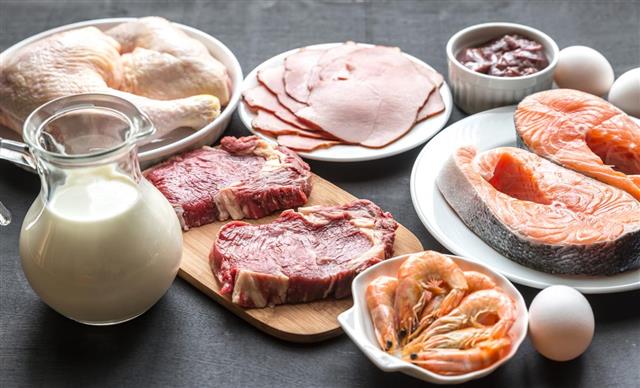 In case of protein deficiency, our body draws amino acids from muscles and other protein-rich cells and tissues for survival!

You probably know protein is an essential macro-nutrient and vital for good health. You incorporate various sources of proteins like eggs, milk, fish, beans, lentils, and nuts in your daily diet. But what exactly do proteins do for you? Why do you need them?

It is important to understand that the structure or makeup of protein molecules determines its functions. Proteins are essentially macromolecules that are made of polypeptide chains. A protein molecule can be formed of a single polypeptide chain or more. Each polypeptide chain comprises a long and continuous string of amino acids that are held together by peptide bonds. These bonds are formed between the carboxyl (-COOH) group of one amino acid and the amino (-NH2- group) of the adjacent amino acid. The type and number of these amino acids arranged in a linear fashion give rise to the varied types of proteins found in nature. Proteins are synthesized in the cell cytoplasm through a process called translation. In this process the mRNA, produced in the cell nucleus (transcription), is transported to the cytoplasm via the nuclear membrane. Here the ribosomes utilize the mRNA as a template and produce proteins.

Proteins are a source of energy like carbohydrates and fats. Equal weights of carbohydrates and proteins provide the same amount of energy (in calories). When we eat protein-rich food, they are broken down into constituent amino acids by enzymes. These are then used by living cells as fuel for building new muscles, cartilages, and repairing any damaged tissue or cell. There are various plant sources (pulses, beans, soya, etc) and animal sources (meat, fish, poultry) of protein that are a part of our diet. Casein supplies the body with the nutrition required to develop bones and encasing muscle. In plant systems they play a vital role in germination. The stored proteins act as a source of nitrogen for the growing embryo, supplying it with necessary energy.

Our bodies are incapable of storing proteins in the same form. An extra intake will result in converting the proteins into fat (for storage) or energy (for consumption).

One of the most important functions of proteins is to provide structural identity to living organisms. Fibrous proteins, called collagen, provide strength, firmness, and structure to body cells and tissues, holding them together in place. Without their presence, cells would not be able to hold together, and tissues and organs would collapse. Connective tissues like adipose tissue, cartilage, tendons, and ligaments are composed of this protein. Keratin forms the protective barrier for most living beings. It makes up the outermost layer of our skin, nails, and hair. In animals, it helps in developing horns, fur, and scales, while in birds it develops beaks, feathers, and claws.

According to the fluid mosaic model our cell membranes are composed of proteins and lipids. Globular proteins and transmembrane proteins help in regulating the flow of small ions and molecules like sodium ions and glucose molecules through the cells. The transport of such molecules occurs through the process of diffusion. Transmembrane proteins extend on either side of the cell membrane that act as a regulator by allowing or denying the entry of ions and molecules. Globular proteins act as carriers by binding to molecules and facilitating its transportation into the cell membrane. Once transported, these proteins detach themselves from the molecules. Transferrin is an example of a transport protein. It carries iron within the immune system.

Enzymes are proteinaceous in nature. They help in catalyzing (increasing the rate of a reaction) various important biochemical processes like glycolysis. They do so by lowering the minimum energy required to carry out a biochemical process, called activation energy. Each enzyme binds to only a specific substrate and increases the rate of conversion of the substrate into other products. These products are then readily used by living bodies to maintain normal growth and development. For example, enzyme Hexokinase acts on glucose (substrate) to give a series of products that are acted upon by various enzyme-releasing ATP molecules (energy) for cell metabolism.

Hormones are proteins that function as chemical messengers. When secreted they act on their target cells, tissues, and organs. They bind to a specific receptor present on the surface of the target. Once attached, they lead to a cascade of signaling responses. These responses are essential for an individual’s physical and mental wellness. Plants also have hormones, called phytohormones. An example of human hormones is growth hormones. As the name suggests, it helps in the overall growth of a living body. Another example is insulin which is a hormone secreted by the pancreas. This is released in the blood and regulates its sugar levels.

The immune system helps in defending the body against disease-causing microbes, contaminants, and other foreign bodies. Most immune responses are carried out by protein entities. For example, antibodies are produced by B cells of the immune system that are highly specific for a particular antigen (foreign bodies like bacteria etc.). These antibodies help in eradicating and neutralizing the harmful pathogens. Also, the complement system of our immune system has a number of small protein molecules. These proteins like C3, C9, etc., get activated in a stepwise fashion creating pores on the cell membranes of the target (bacteria, viruses, etc). This leads the membrane to rupture and ultimately cell lysis. In case of an injury, fibrinogen, a protein in the blood plasma, forms fibrin. Fibrin, literally, seals off the wound and does not permit the entry of any foreign infection.

We know that blood acts as a medium of transportation in human and animal bodies. It supplies vital nutrients, hormones, antibodies, etc., to various organs of the body. However, it maintains a steady pH environment for carrying out its functions properly. This pH is maintained by the protein buffering system along with bicarbonate and phosphate buffering system. The proteins have amino groups and carboxyl groups making them capable of donating and accepting hydrogen ions. Hence, when our blood becomes too acidic or basic, they accept or donate H+ ions. This ensures a neutral pH of 7.4 in the blood.

We have tried to summarize the significance of proteins in brief, however, there are millions of proteins in our living system. They work in tandem with other biomolecules to sustain life. Hence, a person should have appropriate intake of proteins in his diet. This will ensure proper growth and development, both mentally and physically. It is important to understand that deficiency of proteins can lead to various diseases like kwashiorkor, marasmus, cachexia, etc. These have high mortality rate and should be dealt with immediately. The amino acids are vital for the replacement of what the human anatomy is not capable of doing itself.