Explanation About the Process of Rigor Mortis

An important process in the physiology of the human body after death, rigor mortis is one of the most reliable subjects of study to determine the time of death of a living being. Here, we will learn more about this term, its causes, and its various stages.

Home / Uncategorized / Explanation About the Process of Rigor Mortis 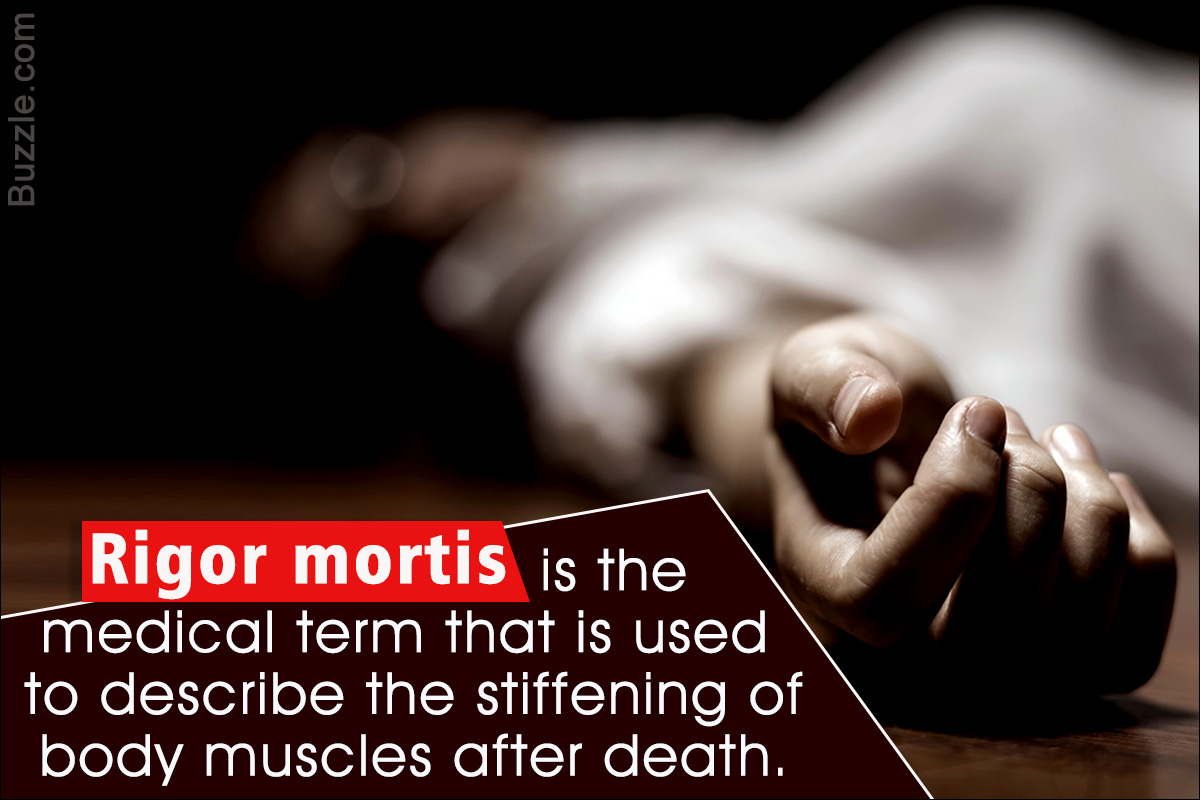 An important process in the physiology of the human body after death, rigor mortis is one of the most reliable subjects of study to determine the time of death of a living being. Here, we will learn more about this term, its causes, and its various stages.

Quick Fact
Along with rigor mortis, most forensic research also looks at postmortem lividity, temperature of the body, contents of the stomach, and insect activity around the body to determine the time of death.

What is Rigor Mortis and How is it Caused?

Within a few hours of death, the body of a person or animal gets stiff and locked in place. This phenomenon is called rigor mortis or postmortem rigidity. Medically, the term is defined as the temporary rigidity of body muscles occurring soon after death.

Rigor mortis occurs due to biochemical changes in muscle tissue, when formation of an enzyme called ATP (Adenosine triphosphate) stops after death due to lack of oxygen in the body. As ATP provides energy for the muscles to move, this stoppage results in proteins like myosin molecules sticking to actin filaments, causing contraction and stiffening of tissue.

Depending on factors such as temperature, the condition can last for as long as 72 hours. The process is a valuable tool to death investigations, as studying the stage of rigor mortis of the body greatly narrows down the time frame of death.

There are a lot of things to consider when examining rigor mortis to make any conclusive statements about a death. Under normal conditions, the process should follow a fixed timeline.

0 – 8 Hours After Death: Till around 10 minutes after death, the muscles in the body are relaxed. This state is called primary flaccidity, and any stiffening is absent. However, after this period, rigor mortis begins to set in gradually; the skin pales, and the body starts cooling (two degrees Celsius in the first hour; one degree each hour thereafter).

8 – 12 Hours After Death: During this period, the stiffening of the muscles goes from a moderate to an advanced stage, and by the time 12 hours have passed, there is absolutely no flexibility in the muscles, and the skin gets discolored due to the collection of blood.

12 – 24 Hours After Death: The rigor mortis is now complete, and at its peak, and the body remains fully stiff for around 12 hours more. It is nearly impossible to move or manipulate any body part without applying a lot of force.

24 – 36 Hours After Death: The stiffness gradually begins to dissipate due to the degradation of proteins in the body, and by the end of the 36th hour, the muscles should have become pliable again.

This is the time when undertakers in mortuaries begin the process of embalming dead bodies, and making them presentable for funerals by adjusting the body position appropriately, before putrefaction begins.

This timeline is appropriate only under regular conditions. However, there are a few factors which alter the timeline, and speed up or slow down the process:

► Exercise Before Death: If a person is involved in strenuous activity just before death, rigor mortis sets in immediately. This is because, at the time of death, the working muscles were depleted of ATP and oxygen.

► Surrounding Ambient Temperatures: If death occurs under warm conditions, the conditions for decay and multiplication of bacteria are hospitable, increasing the pace of rigor mortis. However, if the person died in a cold environment, or of hypothermia, rigor mortis can last for many days. In these cases, one cannot use it to determine the time of death.

► Fat Distribution: More fat in the body adds extra insulation, which causes the process of postmortem rigidity to slow down.

► Disease and Age: People with low muscle mass such as children, the elderly or people suffering from diseases go through the process faster than those with high muscle mass. This is also true when comparing the rate of rigidity between humans and animals, i.e., rigor mortis in a cat will set in faster than humans, while that of an elephant will be slower.

As you can see, this condition has great medico-legal importance, and gives investigative agencies a lot of information while looking at cases of suicides and murder.