Know the Organs of Your Digestive System and How They Work

Ever wondered what actually happens when food that we consume enters the stomach? Well, the food goes through an elaborate process of digestion. Different organs of the digestive system, with their specific functions help in the digestion process.

Ever wondered what actually happens when food that we consume enters the stomach? Well, the food goes through an elaborate process of digestion. Different organs of the digestive system, with their specific functions help in the digestion process. 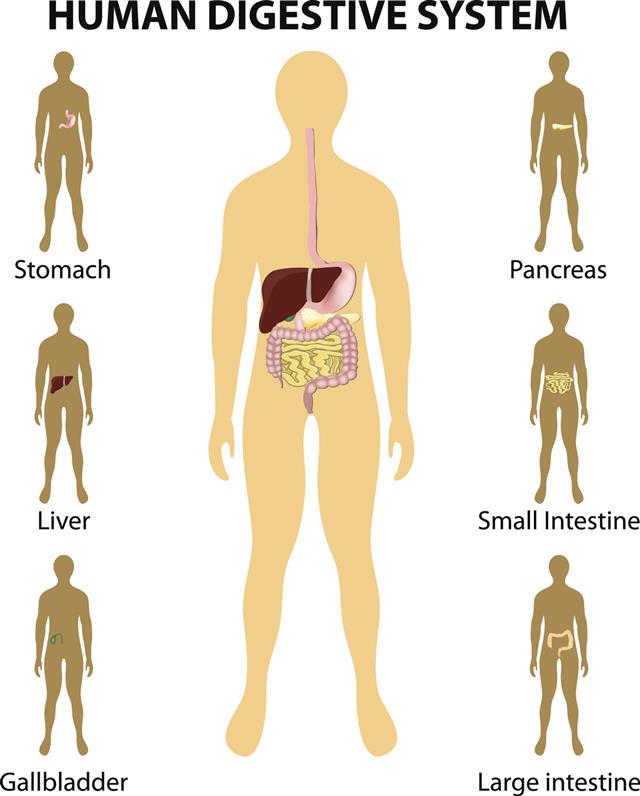 Did You Know …
That the process of digestion begins even before you actually start eating food? When our primary organs like the eyes, nose, and ears sense the presence of food, they alert the other organs to start the production of saliva and different digestive juices which are vital for digestion.

Digestion is the process of breaking down food into smaller molecules, that can be easily absorbed by the body to use as energy to build and nourish cells. The human digestive system provides the body with all the necessary carbohydrates, vitamins, fats and amino acids, that keep the estimated 50-75 trillion cells, functioning. It also eliminates all the waste products from the body.

Throughout this process, there are many organs that contribute to the breaking down of food. Here are all the organs that are involved in the process, along with their functions. You can also refer to the diagram below to know the exact position of the organs.

The Different Organs of the Digestive System and their Functions

The process of digestion starts in the upper gastrointestinal tract which comprises the mouth, teeth, tongue, pharynx, esophagus, and the stomach.

This is the first organ that begins the digestion process and it is here that mastication or breaking down of food takes place. The mouth further contains three basic organs – the salivary glands, tongue and the teeth.

When the mouth receives food, three pairs of exocrine salivary glands secrete saliva, which acts as a lubricating agent to moisten food. Saliva also produces an enzyme called amylase that breaks down the starch present in highly starchy food into sugar or maltose. The saliva also contains some disinfecting or antibacterial properties which kills some of the bacteria and fungi during the chewing process.

This primary organ of taste has much more to it than just taste buds. It helps in the chewing and swallowing process which is also known as deglutition. The tongue guides the food and keeps it between the upper and lower teeth. The masticated food, called bolus is then swallowed.

Just like the tongue, the human teeth play an important role in preparing the food for digestion. As the tongue pushes the food against the teeth, it starts chewing and breaking it into smaller pieces. Though, the teeth do not play an active role in the chemical simplification of the food, chewing makes it easier for other organs to break down food and absorb nutrients.

The pharynx or throat lies behind the mouth or the buccal cavity. The main role of the pharynx is to prevent the food from entering the voice box or larynx and divert it to the esophagus.

The esophagus is a muscular tube that connects the mouth to the stomach. It is around 10 inches long and about 1-inch wide. Once the food is masticated, it passes through the esophagus which has two sphincters that remain closed except during swallowing.

Though, the pharynx and esophagus are not directly related to the actual simplification of food, their function of conveyance of food is extremely important for the gastrointestinal tract.

The stomach is the organ that conducts the mammoth task of breaking down food. It receives the ingested food from the esophagus and mixes it with gastric juices to further break it down. The stomach is divided into four parts.

The cardia receives the bolus from the esophagus. It then goes through the fundus, which is the uppermost part of the stomach. The stomach can dilate to accommodate about a quarter of food and liquid without putting pressure on the organ.

Jejunum: The jejunum is the mid-section of the small intestine. The most important function of this organ is the absorption of carbohydrates and proteins. It has a specialized lining with small, finger-like projections called villi. This villi increases the internal absorptive surface area which in turn helps in the absorption of more nutrients. The villi are also connected to the blood vessels so that the circulating blood can carry the nutrients to different parts of the body.

Ileum: The ileum is the final section of the small intestine. Its main function is to absorb vitamins and other nutrients that are missed by the jejunum. The undigested food is then pushed to the colon.

The average length of the small intestine in an adult male is about 6.9 meters. However, the length varies among different people. It may be as long as 9.8 meters too!

Colon: The main function of the colon is to extract all the water and salts from the waste matter before eliminating it from the body.

The human body has some very important organs in the digestive system which can be classified as the auxiliary organs. Even though these organs are not a part of the digestive system, without them the process of digestion would become almost impossible.

The gallbladder stores bile that has been produced by the liver. In spite of being an important part of the digestive process, the gallbladder is a non-vital organ, meaning that it can be removed if it gets infected.

The liver is one of the most important organs of the human body. The liver basically performs the task of producing digestive juices, biochemicals, and also helps in protein synthesis.
The whole process of digestion requires about 24 to 72 hours and an average person’s digestive tract, along with all the organs, measures about 9 meters long.

The pancreas secrete enzymes into the duodenum which breaks down the fats, carbohydrates, and protein. Another important function of the pancreas is to make insulin that is the chief hormone for metabolizing sugar.

Together, the above organs, with their respective functions, help keep our body working. It is to be noted that after swallowing the food, the digestion process is involuntary and it is controlled by the nerves and brain. The whole process is complex and it won’t be wrong to call the human digestive system truly a marvel.