Frank-Starling Law of the Heart Explained

The Frank-Starling law is an important part of our understanding of the human heart's physiology. In this article, we will learn about the various facets of the law, and how the heart deals with changes in the rate of blood flow. 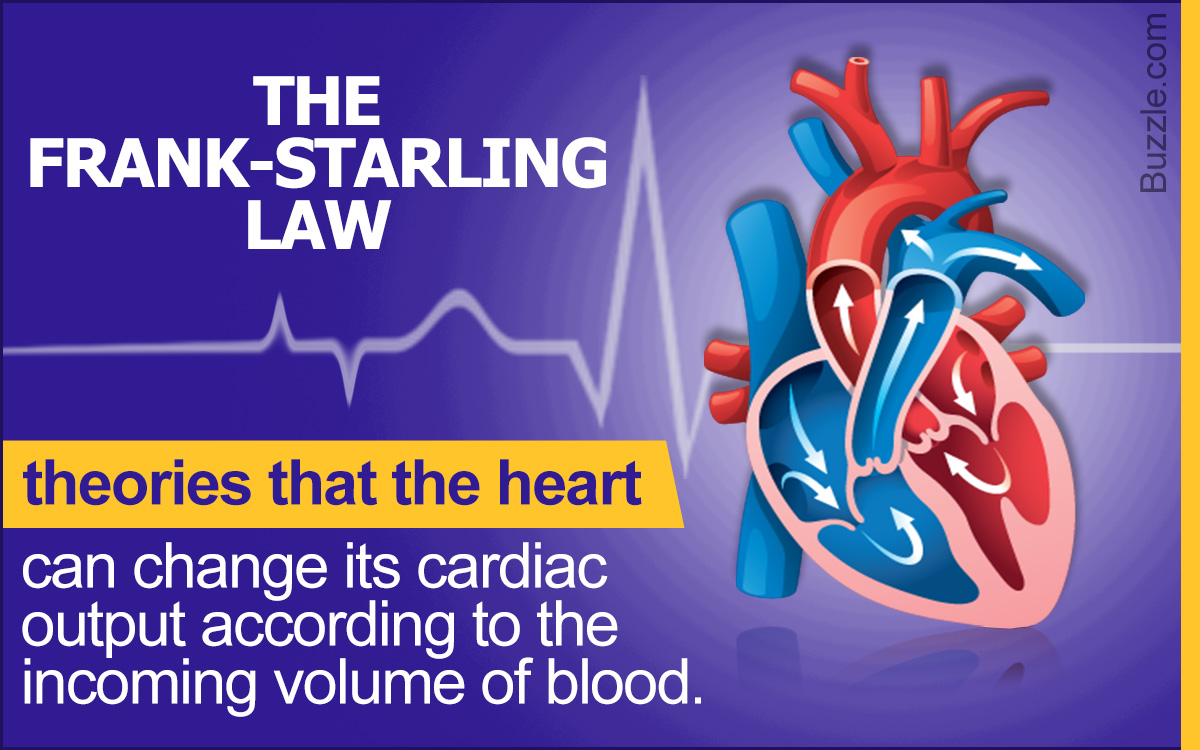 The Frank-Starling law is an important part of our understanding of the human heart’s physiology. In this article, we will learn about the various facets of the law, and how the heart deals with changes in the rate of blood flow.

The basis for the Frank-Starling law originated with an Italian physiologist named Dario Maestrini, who was the first to conduct experiments on the length and functioning of cardiac fibers. However, despite his important contributions, Maestrini is mostly recognized for his efforts only in Italy, where the law is unofficially called ‘Legge di Maestrini’.

Frank-Starling Law of the Heart

The Frank-Starling law, also known as Starling’s law, or Frank-Starling law of the heart, is a physiological theory which states that, ‘the strength of the heart’s systolic contraction is directly proportional to its diastolic expansion, with the result that under normal physiological conditions the heart pumps out of the right atrium all the blood returned to it without letting any back up in the veins.’ This law is named after two physiologists, Otto Frank and Earnest Starling, who were the first to give a detailed description about the cardiac phenomenon. Starling theorized that the function of the cardiac fiber is to set the mechanical energy free, which appears when changing from the resting to the active state.

The Frank-Starling law mechanism can be defined as ‘an intrinsic adaptive response which serves to adjust each ventricular output to its inflow by increasing the force of contraction of the myocardium proportionally to any increase in the length of the muscle fibers’, i.e., increase in the volume of blood entering the heart stretches the walls of the ventricle, which causes the heart to contract with more force, like a stretched rubber band, increasing the volume of each stroke of the heart.

The Frank-Starling mechanism can be seen during periods of physical exercise with lower work rates. This mechanism works to synchronize the rate of the blood flow returning to the heart, and the rate of the blood leaving the heart, without the dependence on external regulation to make the changes, which can range from 2 liters to 25 liters per minute. The increase in the pressure put upon each fiber increases muscle contraction due to the formation of actin-myosin compounds in the fibers and the activation of calcium ions, which depends upon the length of each muscle unit. Maximum force is exerted by the heart when the muscle fibers have an original length of 2.2 micrometers. Fibers which have longer or shorter lengths produce lesser force.

As you can see in the Frank-Starling curve, the increase in blood volume causes a shift along the line towards the right, which raises the end diastolic volume and the stroke volume making the line curve upwards. In cases of pericardial effusion, where fluid abnormally accumulates around the heart, external pressure is put on the heart, which adversely affects its functioning. In these cases, the shift would be on the line moving towards the left, with a decrease in stroke volume. 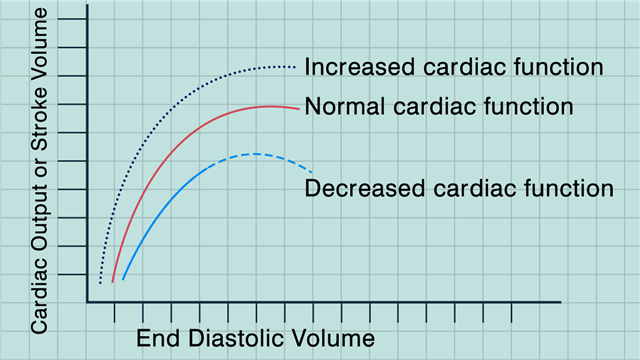 The Frank-Starling law can be seen most easily in premature ventricular contractions. In this condition, the left ventricle empties itself earlier than usual into the aorta. Because the next contraction of the ventricle will come at a regular interval, the time required for filling the left ventricle is raised, causing a rise in the end diastolic volume. Now, as per to the Frank-Starling law, the next ventricular contraction will have more force, pushing a larger amount of blood and bringing the blood flow rate back to normal.

Also, when the blood vessels, such as the arteries and veins, constrict, the end diastolic volume increases due to the overall resistance and decrease in stroke volume. This causes blood to remain after the contraction of the ventricle. As such, the cells of the ventricle stretch, and use more force in the next contraction.

Limits of the Frank-Starling Law

The Frank-Starling law holds true only for a heart with healthy cells, and within certain physiological limits. In a heart which is failing, the more the cells are stretched, the weaker is the force that is exerted back to pump out blood, which usually occurs due to the lower amount of calcium released during each heartbeat. An unusual third heart sound can be heard when the volume of blood increases in this way, which is a sign of imminent heart failure.

Despite these limitations, we can use the Frank-Starling law of the heart to describe how heart failure occurs, and it can play an important part in better understanding the physiology of the human heart, and working with care issues related to cardiac patients.