Different Parts of the Human Ear: Which Ones Have You Heard Of?

The anatomy of the human ear comprises three major parts, namely, the outer ear, middle ear, and inner ear. Each part of the ear is again made up of different components. Let's try to understand the different parts of human ear in detail.

Home / Uncategorized / Different Parts of the Human Ear: Which Ones Have You Heard Of?

The anatomy of the human ear comprises three major parts, namely, the outer ear, middle ear, and inner ear. Each part of the ear is again made up of different components. Let’s try to understand the different parts of human ear in detail.

The human ear functions in such a way that sound waves travel from the outer ear to the middle ear, which are then transmitted to the inner ear in the form of compressional waves. In the inner ear, the compressional waves are converted into electric impulses that are perceived by the brain. This way, we can hear and differentiate various sound types.

The outer ear or external ear is the visible portion of the ear, which serves as a protective organ for the eardrum. It collects and guides sound waves into the middle ear. The outer ear consists of the Ear Flap and the Ear Canal.

Ear Flap (Pinna) – The sound waves enter the ear via the ear flap or pinna.
Ear Canal (Meatus) – The ear canal is about 2 cm in length. It amplifies the sound waves and channelizes them to the middle ear. Sweat glands are present in this canal, which secrete earwax.

The middle ear, located between the outer ear and the inner ear, perceives sound waves from the outer ear in the form of pressure waves. The middle ear is an air-filled cavity and consists of the Eardrum, Hammer, Anvil, and Stirrup.

Eardrum (Tympanic membrane) – The eardrum is a thin membrane that acts as a partition between the outer ear and the middle ear. It vibrates as soon as it receives sound waves, and transforms the sound energy into mechanical energy.
Hammer (Malleus) – It is a tiny bone, located next to the eardrum. Since it lies adjacent to the eardrum, the vibrations from the eardrum cause the hammer to vibrate.
Anvil (Incus) – Anvil is another tiny bone next to hammer; it vibrates in response to the vibration of hammer.
Stirrup (Stapes) – Similar to hammer and anvil, stirrup is a tiny bone in the middle ear. Eventually, it also vibrates and passes the compressional waves to the inner ear.

The inner ear or Labyrinth, as the name suggests, is the innermost portion of the ear. It is filled with a water-like substance and comprises both hearing and balancing organs. The inner ear comprises the Cochlea, Semicircular Canals, and the Auditory Nerve.

Cochlea – The cochlea or the spiral tube is a rolled structure that can stretch to about 3 cm. The membrane lining of cochlea consists of numerous nerve cells. These hairlike nerve cells respond differently to various frequencies of vibrations, which ultimately lead to generation of electrical impulses.
Semicircular Canals – These are fluid-filled loops, attached to the cochlea and help in maintaining the balance.
Auditory Nerve – The electrical impulses, generated by the nerve cells, are then passed to the brain.

This way, the different parts of the human ear perform specific functions that contribute to the overall functioning of the ear. Any damage and/or disorder in the ear parts may lead to ear problems and hearing loss (deafness). 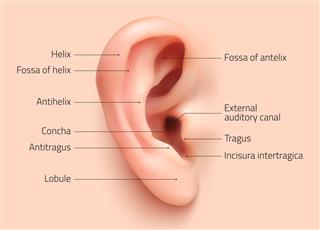 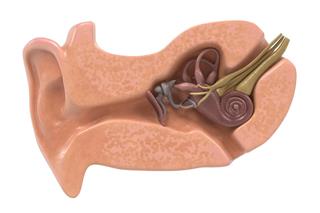